skip to main content
Return to Fordham University
You are at:Home»Inside Fordham»Faculty Reads»The Year that Monks, Nuns, and Friars Disappeared from England

Just in case a declaration of “supremacy” and a cortège of wives weren’t enough to secure Henry VIII perpetual notoriety, a Fordham English scholar is spotlighting one of Henry’s lesser-known yet equally bold endeavors.

Shortly after Henry declared himself head of the Church of England with the 1534 Act of Supremacy, he closed all Catholic convents and monasteries and unhoused every nun, monk, and friar in England, Mary Erler, PhD, writes in her latest book.

“The practical question of what happened to these people after their institutions were closed has always interested historians,” said Erler, who was honored on March 7 at the Center for Medieval Studies annual conference, which drew its theme this year from Erler’s life work. 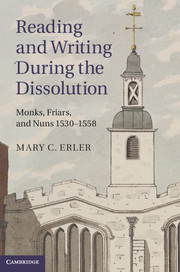 “Did men continue to operate as priests? If so, where and how? Did they assume clerical jobs, although they were no longer monks?”

In Reading and Writing During the Dissolution: Monks, Friars, and Nuns 1530-1558 (Cambridge University Press, 2013), Erler investigates the virtual disappearance of English religious communities during the early years of the Reformation. Women religious in particular were left with few options after their convents closed, forcing many to simply retire to the homes of family members, Erler said.

And yet, she has found, not all religious disagreed with the king’s decision.

“We would imagine that anger and political opposition would be dominant, but this is not entirely so,” Erler said. “Some religious agreed with the reforming position—that institutional religious life was no longer workable or inspiring.”

One such religious was Margaret Vernon, a successful abbess who was the head of four nunneries. Vernon was also a close friend of the king’s chief advisor Thomas Cromwell, whom she met while Cromwell was a lawyer working for Cardinal Wolsey.

Through their surviving correspondence, Erler has worked to piece together the role Vernon played in the religious reformation, as well as in Cromwell’s life.

“A series of letters from Vernon to Cromwell suggests that she may have been part of his reforming circle,” Erler said. “Some of her letters to him were published in the 19th century, but not all, and her story has not been fully told before.”

Erler’s scholarship is timely, as the figure of Thomas Cromwell has recently gained heightened interest in advance of a PBS miniseries, Wolf Hall, which will tell the story of Henry’s court through the eyes of Cromwell. Set between 1527 and 1535, Wolf Hall chronicles the downfall of Cardinal Wolsey for failing to annul Henry’s first marriage; the failure of Anne Boleyn to produce a male heir; and the execution of Thomas More for refusing to ratify the marriage to Boleyn.

The six-part miniseries, which is based on a pair of books by British author Hilary Mantel, premieres April 5. A theatrical version is currently in previews on Broadway.