skip to main content
Return to Fordham University
You are at:Home»Inside Fordham»The Primacy of Sapientia and the Best of Doctrina 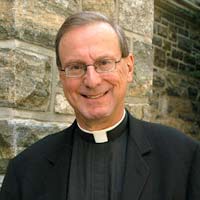 I invite you to imagine a letter home from a freshman at a university:

Thanks for the money. I have lots of news. First of all, Dad, I know you wanted me to be a lawyer and get rich, but I read this great book and decided to switch my major to philosophy. I’m going be a teacher, and I probably won’t be able to help the family much.

And then, Mom, I know you’re a good Catholic, and you want me to be one, too. But I met these great guys — they’re really smart. They helped me to read the Bible critically, and showed me that there are deep truths about the universe hidden under all the things Catholics believe. They gave me truth, not faith. So I joined them, and maybe some day you will, too.

And, finally, guess what? You’re going to be grandparents!

We don’t know if he ever wrote that letter, but he could have. His name was Aurelius Augustinus or, as he is more often called, St. Augustine of Hippo.

St. Augustine (354–430) was a teacher of grammar, dialectic and rhetoric for 12 years, a great educator and a philosopher of education. Early in his studies, he read a book by Cicero called the Hortensius, a call to study philosophy. Then and there, Augustine devoted his life to the pursuit of wisdom, thesapientia of Fordham’s sapientia et doctrina; as one translator phrases it, “my heart began to throb with a bewildering passion for the wisdom of eternal truth.” He thought he discovered truth with the Manichees and, for nine years, remained a member of that theosophical sect. Finally, though, after a long intellectual journey, he found his way to the Catholic Church of his mother, and she lived to see him baptized by St. Ambrose. It was in Jesus Christ that Augustine finally found true sapientia.

And the woman who was his companion did bear him a son, Adeodatus. Augustine tutored his son, and he was awed by the boy’s intelligence. Adeodatus died at the age of 16 or 17, and Augustine wrote a book, On the Teacher, as a tribute to his dead son. Near the end of that book, he has a sentence that every teacher might ponder: “Who is so foolishly curious as to send his son to school to learn what the teacher thinks?” The pupils rather take what they have been taught and measure it against the standard of the inward truth, and finally against truth itself.

One of Augustine’s most influential books is De Doctrina Christiana, which leads us to reflect on thedoctrina of Fordham’s sapientia et doctrina. Modern scholars debate the best translation of the word doctrina in Augustine’s title: is it “doctrine,” or “teaching,” or “culture”—or perhaps all three? On Christian Doctrine? Teaching? Culture?

Augustine stood in the great tradition of liberal arts that reaches back to the ancient Greek city-state and forward to Fordham University’s core curriculum. Its goal was eloquentia perfecta, perfect eloquence. In the Greek city-state, that man had power and influence in the assembly of citizens who could persuade his fellow citizens to accept the policy he proposed. The Greeks, starting with the Sophists, developed a system for educating men to become orators. The system presupposed many other disciplines that the orator needed to call on: grammar, rhetoric, poetry, mathematics, history, philosophy, and others.

The Fathers of the Church—Christian writers and teachers of the first six or seven centuries after Christ—were often concerned with education, but they also sensed an ambiguity about it. The classic texts of Greek and Latin literature, which were used to educate young men (women received a different sort of education), were filled with stories of gods and goddesses and, even more, with immorality. Should Christians simply reject education to protect their faith? If they did, they would remain poor and without influence.

A few Fathers tried to create a parallel system. In the Greek East, a father and son, both named Apollinarius, rewrote the Bible as an epic poem (the Pentateuch), lyric poetry (the psalms) and Platonic dialogues (the gospels).

A more fruitful approach was that of St. Basil of Caesarea (ca. 329/330–378), who wrote a famous treatise, To Young Men, on profiting from Greek literature. Basil concluded the inevitable: to succeed in life one needed the same education that pagans had; but one did not need to be corrupted by it. In fact, classical education could serve a higher, Christian end. Basil used an image that was to become a commonplace: just as the Hebrews took gold and silver from the pagan Egyptians, “the spoils of Egypt,” and used them to honor the true God, so Christians could use pagan learning to achieve a better understanding of the Holy Scriptures.

A third writer and a third book mark the resolution of the ambiguity and the transition to the Christian Middle Ages. At the end of the patristic period, Cassiodorus (ca. 485–ca. 580), an aristocrat and later a monk, founded a monastery in Italy, which he named Vivarium, and endowed it with a great collection of books, pagan and Christian. He gave his monks the task of carrying on the old learning, in an age when it was being forgotten or lost. To guide the monks, Cassiodorus wrote a pair of books, On Divine Lettersand On Human Letters, which constituted a sort of founding document for Christian schools and Christian education in the Middle Ages.

These Fathers taught the primacy of sapientia, but they also showed how the best of doctrina could be integrated into the Christian life; and their legacy lives on.