skip to main content
Return to Fordham University
You are at:Home»Faculty Profiles»The Ebb and Flow of Roger Panetta 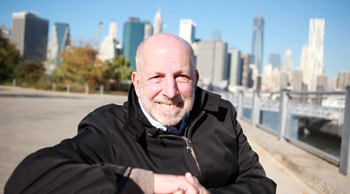 Roger Panetta studies the past and present of the Brooklyn waterfront.
Photo by Tom Stoelker

“On the ferry-boats, the hundreds and hundreds that cross, returning home, are more curious to me than you suppose…”

So wrote Walt Whitman in an era before the Brooklyn Bridge was built, a time when the only way to get from the City of New York to the then-City of Brooklyn was via ferry. It’s a part of the city’s history that Roger Panetta, Ph.D., lecturer in history, would like to see revitalized.

“One of the things that bridges and tunnels have done is that they’ve encapsulated our experience of the water,” he said. “But in the ferry you can feel it. You can smell it.”

As curator of the Hudson River Collection for the University Libraries and as a former curator at the Hudson River Museum, Panetta sits at the epicenter of a golden age for local history, and of riverfront history in particular.

But it wasn’t the verses of Whitman that drew Panetta to the river. Sing Sing prison did. He wrote his dissertation on the famous correctional facility that sits on the banks of the Hudson River just north of Sleepy Hollow.

Literary references aside, Panetta reserves his own rhythmic prose for when he discusses urban infrastructure, including upstate prisons. Standing at the edge of the newly configured Brooklyn Bridge Park, he points out how air vents of the Brooklyn Battery Tunnel represent a defeat of master builder Robert Moses’s plan to build a bridge that would have destroyed the waterway vista. In a quick aside he adds that First Lady Eleanor Roosevelt played a decisive part in the drama.

Born and bred in Brooklyn, Panetta’s scholarly journey researching Sing Sing also took him to the suburbs. He eventually shifted away from the narrow focus of the prison and toward the study of the county that it was housed in, Westchester—one of the country’s first suburbs. The high-toned history of the commuter lifestyle has been recently popularized in television and the movies, but Panetta was well ahead of the curve, having edited a 2006 book on the subject titled, Westchester: The American Suburb (Fordham University Press).

“I had an impulse to find, within the local, reflections of national issues,” he said. “This has really been a dominant theme in my academic life, research, and teaching.”

Panetta said it’s no accident, then, that he has now come full circle and is living back in the community where he was born and bred. He is currently the visiting scholar at the Brooklyn Historical Society, where he is researching the ferries, as well as the history of the Manhattan skyline—as seen from the Brooklyn Heights Promenade.

Panetta said the promenade’s elevated perch was always used to document the scope and power of the city as it grew. But as he gestured to the Manhattan skyline to make his point, he did so from the sea-level vantage of Brooklyn Bridge Park, formerly a series of industrial piers. He said the challenge of reimagining the waterfront for each successive generation has always been to figure out what anew use could be. Too often planners tried to resuscitate the recent past.

“See those tall [masts],” he said pointing to the historic ships of the endangered South Street Seaport Museum. “They were the first skyscrapers. Wall Street [had]its financial connection to South Street; now its towers engulf it.”

While he applauded the 1970s-era festival-market design of the soon-to-be-re-renovated seaport, he said that its connection to the past wasn’t authentic enough. People, he said, need to connect to the river in a more real and meaningful way.

“In that sense we’ve gone full circle to the 19th century, when thousands of people commuted every day from this very same pier,” he said, as the new East River Ferry arrived and discharged a dozen or so passengers. “It’s the visceral experience of the water that’s so critical.”

In the video below, Professor Roger Panetta discusses the evolution of New York’s waterfront at the Brooklyn Bridge: