skip to main content
Return to Fordham University
You are at:Home»Inside Fordham»The Disadvantaged Have a Fierce Ally in Law Grad 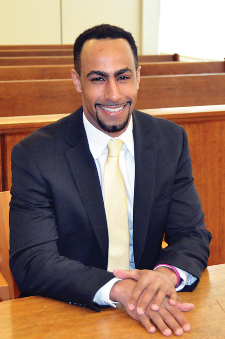 Jerry Dickinson embraced the notion of “men and women for others” as an undergraduate at the College of the Holy Cross, and continued it at the Fordham School of Law.

Take Jerry Dickinson, a Pittsburgh native who is graduating from the Fordham School of Law. Adopted by white parents when he was three months old, he grew up in a foster home with ten siblings, seven of whom were likewise adopted.

After a childhood in what he calls a “real-life multiracial Brady Bunch,” he went to the College of the Holy Cross, where upon graduation, he earned a Fulbright scholarship to study law and help defend squatters living in the slums of Johannesburg, South Africa from eviction.

A year later, when he entered Fordham, many of his peers were just learning the ropes of researching and publishing. By contrast, Dickinson was putting the finishing touches on his first peer-reviewed law review article, based on his time in South Africa.

He went on to publish two more articles and edit the law school’s Environmental Law Journal.
His research is focused on land use law. His most recently published case analysis was on a community benefits agreement that was struck with a private developer before the exercise of eminent domain. It ensured there would be affordable housing as part of the Barclay’s Center development in Brooklyn, in what he has coined “inclusionary eminent domain.”

The most memorable aspect of his time at Fordham Law has been representing low-income tenants at the Manhattan Housing Court as part of the school’s housing rights clinic. Particularly rewarding was when he and a classmate argued and won a motion in February 2012 to dismiss the eviction of a single mother who was on public assistance.

“That was an amazing experience because, while I had been part of a litigation department in South Africa that was doing this kind of work, attorneys were doing the arguing and I was the one researching,” he said.

“Here, I became the student-lawyer, arguing in front of a judge and preparing documents under the supervision of professors.”

Dickinson made this happen even as both his parents developed life-threatening illnesses (pancreatic cancer and an ischemic stroke) that forced him to travel by bus or train to Pittsburgh every two weeks to help care for them. The trips home were necessary during his entire time at Fordham.

“My experiences have taught me resilience and determination to deal with those matters in a way that still allows me to complete my education, and I think that Fordham has provided the avenues, programs, and flexibility for me to actually do both and complete my studies in a timely manner,” he said.

In a way, Dickinson said, working for groups like the law journal and the Fordham Law Democrats helped him keep his mind off his concerns at home.

“It [dealing with parent illnesses]hasn’t been something that has brought me down; it’s uplifted me to get through law school,” he said.

Dickinson will be heading back to Pittsburgh to work for two years for the real estate group at the law firm Reed Smith, where he’ll be representing private developers in land use appeals. He’s also planning to conduct pro bono work representing public assistance tenants in eviction proceedings. After that, he’s accepted an invitation to clerk for a year for Theodore Alexander McKee, chief judge of the U.S. Court of Appeals for the 3rd Circuit, in Philadelphia.

Then, he plans to return home to Pittsburgh.

“Sometimes things in life happen and you have to adjust to them, and with the circumstances with my parents’ illnesses, I want to move back and be closer to them,” he said.

“I really never thought I’d be back in Pennsylvania after being away for so long, because I really enjoyed traveling the world. But I think Pennsylvania really is where my future lies.”