skip to main content
Return to Fordham University
You are at:Home»Faculty Profiles»The Dark Side of Globalization: When Authoritarian Countries Reap Benefits of International Investment 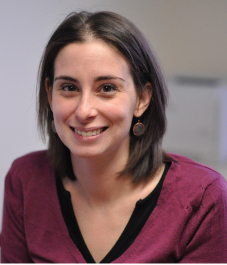 AIda Bastiaens analyzes how forces both at home and abroad affect developing countries as they integrate into the worldwide economy.
Photo by Patrick Verel

If you are a CEO today, you can situate your company’s facilities anywhere in the world, no matter how remote, thanks to advances in communications and transportation.

But the freedom to locate anywhere that can help a firm’s bottom line also has some important social and political implications, says Ida Bastiaens, Ph.D., assistant professor of political science.

For her dissertation, Bastiaens, who joined the Fordham faculty last year, cast a critical eye upon the ways that countries with poor human rights records attract foreign direct investment (FDI).

Bastiaens makes a distinction between authoritarian countries that signal that they’re open to foreign investment, such as Jordan and Morocco, and those that aren’t, like Cuba and North Korea.

“I’ve always studied the developing world and poverty issues, said Bastiaens. “This study was a nice logical step from looking at what the welfare indications are of FDI to what the sources and implications of FDI are in authoritarian countries.”

Bastiaens sent a survey to 1,000 companies to find out how they choose where to invest. She found that as a general rule, flagrant human rights abuses will scare a company away.

However, evidence persists that companies appear willing to overlook such abuses if the country produces something the company really needs. China is a good example.

“Companies think about a country’s political factors in terms of risk and profit. Political factors play into the decision, but companies don’t necessarily think, ‘Oh, this country is authoritarian, we shouldn’t go there,” she said.

Bastiaens is using a Fordham first-year faculty grant to do a second round of surveys in hopes of strengthening her initial findings on issues such as a businesses’ perspectives on property rights, civil society, and labor unions.

“The study is looking for firsthand evidence as to what businesses prefer in those areas when they’re investing in authoritarian countries,” she said.

In addition to analyzing which political factors are associated with greater economic integration, Bastiaens studies how domestic politics affect a nation’s ability to cope with the integrational challenges.

Bastiaens addresses this question in “Democracies in a Conundrum: International Trade and Government Revenues in Developing Countries,” a paper she co-authored with Nita Rudra, Ph.D., associate professor of political science at Georgetown University. The paper is under review.

“As countries are liberalizing and engaging in free trade, they can’t tax imports anymore to the extent they used to. So they have to strengthen their domestic taxes, like sales, income, and value added taxes,” she said.

“In non-democracies, they don’t have the same electoral pressures and they can rely more on coercion to implement these sorts of changes.”

In nations where decision-making is relegated to a few—unlike in a democracy—it is much easier to change the laws governing taxation.

Organizations such as the World Trade Organization, the International Monetary Fund, and the World Bank are primary drivers behind the liberalization of trade policies in developing countries. So Bastiaens said they’d do well to recognize the specific challenges that democracies face when they open their markets.

“We’re not encouraging authoritarianism by any stretch of the imagination. It’s important to note that different countries, based on their regime type, have different challenges,” she said.
Bastiaens is also looking at a new trend in FDI: agricultural investment by nations themselves. Whereas in the past, a private company like Dole might invest in land in Guatemala to grow bananas to sell elsewhere, now countries like China and Saudi Arabia are investing in African countries for their own agricultural purposes.

Democracies tend to be better at maintaining the rule of law, which makes them more attractive to FDI in general. However, in agricultural FDI by nations, this preference is reversed.

“With agricultural FDI, nations just want to go somewhere where they can get a quick deal, grow the food, and send it home, because there’s such a shortage they need to address. So they’re less worried about long term risk,” she said.

“A lot of what I look at is whether these authoritarian countries are benefiting from globalization. Maybe it’s good they are, because then their people will be more exposed to the international community. This is an open question.”