skip to main content
Return to Fordham University
You are at:Home»Inside Fordham»The Art of Direction 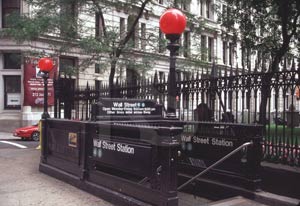 Have you ever come up out of a subway station in an unfamiliar neighborhood and been confused? Help, it appears, is on the way. Fordham visual arts students are taking part in the Compass Decal Design Exploration sponsored by the New York City Department of Transportation.

The competition is soliciting design proposals for orientation elements to point pedestrians toward their destinations as they exit from below-grade subway stations or descend to the street from above-ground platforms at 16 locations in the Bronx, Manhattan, Brooklyn and Queens. The proposals will include a full-scale mock up; a site plan illustrating the proposed location; visual documentation (drawings, renderings, photographs or footage of proposal located at site); and research, including a description of site and community and copies of any surveys or interviews.

Between six and 10 students from the “Graphic Design II” class will have their proposals ready this month, said Abby Goldstein, associate professor and head of the design concentration at Fordham. The project began in Goldstein’s “Graphic Design III” and Colin Cathcart’s “Design and the City” classes last fall. There will be an exhibition of the proposals, and they will be judged by some of the most prestigious designers in New York, according to Goldstein.

Fordham is the model for the project, Goldstein says, and is one of the few universities invited to participate. Later this month, the top proposals will be reviewed, and winners selected, by officials from the Business Improvement Districts in which the 16 subway stations are located. The temporary compasses are scheduled to be installed next spring.