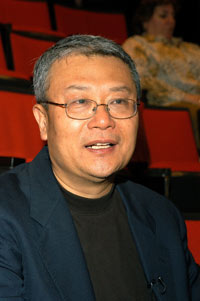 Writer and poet Ha Jin took on the challenge of co-writing the libretto for
the opera, The First Emperor.
Photo by Ken Levinson

Ha Jin is extolling the virtues of the life academic for poets and novelists. First and foremost, the National Book Award winner and Pulitzer Prize finalist tells the audience in McNally Amphitheatre, teaching provides a steady income.

“That’s very important,” he deadpans with a comedian’s timing. “For two years, I didn’t have a job; I didn’t teach. I realized that I began to think about how to sell books. That means you become a victim of the tyranny of the book market.

Ha Jin’s epic journey from the Chinese countryside to the epicenter of American letters is as compelling as any of his books. Ha discussed his writing with Chris GoGwilt, Ph.D., professor of English and comparative literature at Fordham, on Nov. 16 as part of the Ford Foundation’s educational outreach program for the Metropolitan Opera’sThe First Emperor, for which Ha co-wrote the libretto with composer Tan Dun.

The son of an officer in the Chinese People’s Army, Ha’s youth was spent on military posts throughout the vast rural landscape of northeast China, a geography that looms large in his fiction and which has drawn comparisons to William Faulkner’s Yoknapatawpha County and James Joyce’s Dublin.

After receiving a Ph.D. in English from Brandeis University he planned to return to China, settle into a faculty position and, perhaps, when he got old, write a memoir. Then came the events at Tiananmen Square in 1989.

The Chinese government’s crackdown on pro-democracy protests turned his world upside down—closing off any opportunity for him to go back to China and launching him into a literary career.

“I had to start from scratch and learn how to survive,” says Ha, who worked a series of odd jobs before landing his first teaching position at Emory University. (He is now a professor at Boston University.) “Once I decided to stay, I had to start a different kind of life and find a job like everybody else.”

At 50, Han’s closely cropped hair is now speckled with gray and his face is lightened by an easy smile and framed by a pair of wire-rimmed glasses. He has a tendency to punctuate his considered, heavily accented English with a mischievous, guttural laugh that places him squarely in the region between impish and avuncular.

It was the realization that all good stories ultimately deal with universals about the human condition, he tells the audience, that allowed him to set aside any reservations about writing in a language not his own.

“I found that most of the writers who really make it, published writers, have uncertainty,” he says. “Nobody has certainty, not if you are really writing a piece of work. Risk is always part of the process.”

He wrote two collections of short stories and two books of poetry. The short story collections won the PEN/Hemingway Prize and the Flannery O’Connor Award for Fiction. In 1998, he published a novella and the following year his first novel, Waiting (Pantheon), which won the National Book Award and PEN/Faulkner Award.

His latest novel, War Trash (Pantheon, 2004), also won the PEN/ Faulkner Award and was a finalist for the Pulitzer Prize. Winning the PEN/Faulkner Award a second time places him in the airy heights inhabited by only two other writers, Philip Roth and John Edgar Wideman.

In 2005, he took on a new project, co-writing the libretto for The First Emperor, which opened at the Metropolitan Opera on Dec. 21. He says it was an experience unlike any other—exhilarating, wonderful and vexing. In fact, Ha says he took the commission on the condition that composer Tan Dun be his co-librettist. That, he says, was invaluable. Nonetheless, mastering the art form proved to be a substantial challenge, leaving him with the disquieting feeling of “working in the dark, constantly.”

“I would write words and they might work as a poem but they did not work with the music,” he says. “On a project like this I had to be very flexible … and to remind myself that this was a commission. It was not something I just wrote and somebody wanted to perform as written. I had to be very rational and reasonable about this.”

His next novel, A Free Life, is set in the United States and chronicles, he says, the life and times of an immigrant family. When asked about the fact that his fictional landscape has taken on a decidedly Western character (the story is set in, among other places, Boston and New York City), he is nonplussed, but only for a second.

It is true, he says, that he has been writing in English for many years and his latest story has crossed the Pacific Ocean. But a writer can only write about things he is passionate about and, what’s more, the China of his youth will never stray far from his thoughts.

“There is no doubt that there is some alienation,” Ha says. “There is some estrangement when you write in a language other than your native one. On the other hand, writing in English has given me a more rational and objective view of China. It creates a kind of distance and in some ways it enables me to be more objective.

“But I don’t think it can break your connection,” he says. “It’s impossible. I grew up in China. I lived there for 29 years before I came to the U.S. It would be insane to negate my past.”