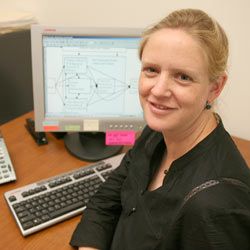 Stephanie Jones, Ph.D., in her office in Dealy Hall on the Rose Hill campus.
Photo by Michael Dames

If your goal is to improve the educational chances of high-risk children by helping them deal more effectively with their emotions, there are two basic approaches. One is to focus on the kids: seeking to teach them skills such as anger management, cooperation, and negotiation. The other is to focus on the classroom, to see if changes in its atmosphere can improve students’ chances of acquiring these and other important social skills.

Stephanie M. Jones, Ph.D., assistant professor of psychology at Fordham, wants to do both. Or more precisely, she wants to see whether doing one may also allow you to do the other. It’s a two-step approach, featuring a multi-million-dollar study on the effectiveness of a curriculum called the 4Rs Program, and a smaller “study within the study” on the manner in which implementing the 4Rs curriculum also improves classroom culture and climate.

The four Rs are reading, writing, respect, and resolution. As that list indicates, the kindergarten through sixth-grade program is designed to serve double-duty by combining basic education with the teaching of social-emotional skills.

The program, created by Educators for Social Responsibility, uses carefully selected children’s books as springboards for focusing the student’s attention on such matters as listening, handling anger, being properly assertive, cooperating, and countering bias.

“For example,” Jones says, “the lesson might be focused on how you evaluate a situation where you’ve been provoked — was it by accident on purpose? — and move through it without engaging in overtly aggressive behavior, like hitting or pushing.”

The program is innovative because it’s embedded in a literacy curriculum, she adds. That’s important because, given today’s heavy emphasis on academic standards, schools dealing with troubled children find it hard to make time for materials focused purely on social-emotional skills. “The program is not an add-on,” Jones says. “Schools don’t see it as something they have to put on top of everything else they’re doing.”

Jones’ main work stems from a four-year, $5 million to $6 million study funded by the U.S. Department of Education and the William T. Grant Foundation to test whether the program works. “We’re going into our final year in eighteen schools in four boroughs of New York City,” she says.

This summer, Jones and colleague Joshua Brown of New York University received an additional $524,340 grant from the William T. Grant Foundation for a companion study on how the program influences classroom dynamics — and whether those changes might also play a role in helping high-risk children improve their social-emotional and conflict-resolution skills.

The grant allows Jones and Brown to train undergraduate and graduate students to observe classrooms and evaluate them under a scoring system developed at the University of Virginia. Under that system, the observers can score such factors as the degree to which a classroom is emotionally positive or negative, and whether lessons are built around a concept or are merely rote memorization. They can also rate the degree to which teachers react to children’s language skills and consciously build on them or ignore them and make one-size-fits-all statements.

“We think these things matter,” Jones says. “The classroom is an environment in which children spend a great deal of time.”

Jones finds Fordham to be a perfect setting in which to pursue such research. Her graduate school adviser, at Yale University, was the founder of Head Start, and her own graduate studies involved the effects of poverty and exposure to community violence on the social and emotional development of children and adolescents.

“Fordham believes that one should do well for others, and is very interested in the impact of poverty on children and families,” she says.

She also finds Fordham to be unusual in its interest in applying child-development theory and research to the development of programs that might be socially beneficial. Such support for both theory and social applications is unusual in psychology departments, she says. “But Fordham is a place that’s utterly supportive of that type of work.”

So too are her students. “I find that they love the policy aspects of the courses I teach,” she says.

By Richard A. Lovett