The Human Mind in Decline 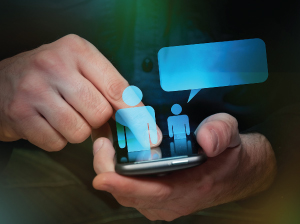 “Millennial students don’t know the basic rules of discourse. They are struggling to learn how to communicate face-to-face and not just on the iPhone.”

On a recent visit to Fordham, philosopher Maurizio Ferraris, Ph.D., explained what many students already know and practice: cell phones are not for talking. In his new book to be published this summer by Fordham University Press, Where Are You? An Ontology of the Cell Phone, Ferraris argues that cell phones are writing machines.

“If you can use your living voice, why would you use dead letters?” Ferraris asked. “Because we don’t like the voice.”

By taking the function of the phone from voice to writing, he argues, the smart phone essentially becomes a recording machine, a journal. Since text could be publicly available well after the conversation is completed, it also outlasts the life of the actual conversation—as well as that of the writer.

“The basis of this sort of social bond is not communication, but recordability,” he said.
Ferraris’ view hints at the growing debate among academics as to how texting is changing literacy and sociability.

Lance Strate, Ph.D., professor of communication and media studies, said that when this generation’s new media first arrived on the scene, its emphasis on text spurred hope of a new generation of literacy. But now that the net has become increasingly visual, Strate says that a “telegraphic discourse” has come to dominate, where images and immediacy vie for cell phone users’ attention.

“New media continues to be text-based, but it’s becoming much more visual,” he said.
Strate said that in Postman’s view an increased emphasis on image elicits emotional rather than rational responses to information. On the flipside, today’s emphasis on efficiency creates what Strate calls “hyperrationality,” which he compared to a numbers game.

“Both take us away from the balance of oral and literate,” he said.

Swarthmore College President Rebecca Chopp, Ph.D., during a visit to Fordham, said that texting has spawned “one of the greatest crises in America.”

“Millennial students don’t know the basic rules of discourse. They are struggling to learn how to communicate face-to-face and not just on the iPhone,” she said at a recent Center for Ethics Education symposium.

But there are others who find the changes less threatening. Addressing the Fordham faculty at Faculty Technology Day, tech writer David Pogue said that “every generation has its bugaboo” and that “we tend to worry more than necessary.”

Associate Professor of Education Fran Blumberg concurs. “I don’t see it as that dramatic, as if this is going to change the face of the human race, or like we’re going to have chips in our brain,” said Blumberg, Ph.D., who teaches counseling psychology in the Graduate School of Education (GSE). Blumberg, whose own research includes the development of children’s attention in digital learning settings, said the phenomenon is clearly a cross-disciplinary problem, involving media studies, childhood development, cognitive psychology, business, and, of course, computer science.

Kristen Turner, Ph.D., a GSE associate professor, is an expert on the nature of digital language and the choices students make in their digital writing. Turner said that using the written language in place of oral communication has learning possibilities that should be exploited.

“The students are very aware of their audience when they text, and as a writing teacher I’m always trying to explain ‘audience.’ In texting, they get it,” she said. “My perspective is that literacy is changing. We have to teach differently and learn differently because of that. And we better do it fast or we’ll be in trouble.”

Babette Babich, Ph.D., professor of philosophy, said that fear of new technology is nothing new, and she teaches that in a Philosophy and Media class. She points out that, in Plato’s Phaedrus, Socrates uses the Egyptian myth of the god Theuth and King Thamus to make the case for the superiority of rhetoric, memory, and the spoken word over the then-newfangled written text.

“Those who acquire [writing]will cease to exercise their memory and become forgetful,” Socrates said. “They will rely on writing to bring things to their remembrance by external signs, instead of by their own internal remembrances.”

“We live on a diet of texts, Tweets, and ‘likes,’ always hungry for the next dopamine rush of the new,” said Babich. “But the problem is that today’s students have an anxiety in the time pressures of receiving and replying to a text.”

“If for Socrates the human mind has been in decline since writing began, the ‘rules’ for texting can accelerate that decline.”

The irony, of course, is that Plato recorded Socrates’ words in text.