skip to main content
Return to Fordham University
You are at:Home»Inside Fordham»Ted Koppel Discusses Hot-Button Issues in the News During Presentation at GBA 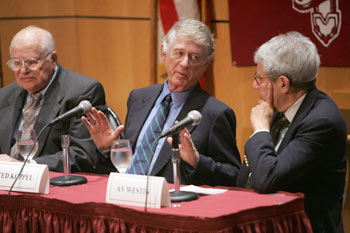 The news media’s increased use of video footage provided by “citizen journalists,” often shot with cell phone cameras or small handheld camcorders, is a “terrible thing,” according to veteran news anchor Ted Koppel who visited Fordham University on Sept. 24.

“I do not dispute that they play a useful role, but I think it’s a huge mistake because the Internet and these non-solicited reports can also be used by organizations that want to circumvent normal safeguards that a traditional news organization has in place,” said Koppel, who addressed an audience at the McNally Amphitheatre on the Lincoln Center campus.

Koppel’s presentation was part of an event sponsored by the Fordham University Graduate School of Business Administration’s Center for Communications and the Academy of Television Arts and Sciences.

Koppel, former anchor of ABC’s long-running news program, Nightline, and current managing editor of the Discovery Channel, also discussed several hot-button topics, such as the decision by Columbia University to invite Iranian President Mahmoud Ahmadinejad to speak at its campus in September.

“It’s exactly what universities should be doing,” Koppel said. “The purpose of a university is to be a forum for provocative ideas.”

Koppel and his wife, Grace Ann Dorney Koppel (UGE ’60), were last at Fordham in 2003 when they delivered the commencement address and received honorary doctorates of humane letters, honoris causa. Ted Koppel has won every major broadcasting award in his long career, including more than 40 Emmys.

As part of Koppel’s presentation, he was interviewed by Av Westin, former senior vice president of ABC News and current executive director of the Foundation of the National Television Academy, and Bill Small, chairman of the News and Documentary Emmy Awards and former dean of Fordham’s Graduate School of Business Administration.

Westin asked Koppel why the White House press corps was not more aggressive in asking questions when the Bush administration announced plans to go to war in Iraq in 2003.

“I don’t know of too many people who, at that time, did not believe that the underlying premise of the war—that former Iraqi President Saddam Hussein had and planned to someday use weapons of mass destruction—was that much of a leap,” Koppel said, adding that reporters today are “much tamer” because they are concerned they might not be leaked information by high-ranking officials.

“Now, if you get too aggressive or if they don’t like what you’re asking, [government officials]can say, ‘Well, you’re not going to get access to the president or secretary of state, etc.’ and other reporters will,” Koppel said.

Small asked Koppel if he planned on writing a blog, which is being used more and more by journalists, including Katie Couric, anchor of the CBS Evening News.

“I don’t think I’ll sign on to that,” Koppel said. “They keep saying the young are abandoning television news and newspapers, but when I was in college, I can’t say I was reading the best newspapers, either. My sense is as people get older and have families, they’ll want more reliable news.”

Koppel also talked about former CBS Evening News anchor Dan Rather’s $70 million lawsuit against CBS and Viacom, in which he claims he was made a “scapegoat” for a discredited story about President Bush’s military service during the Vietnam War.

“Dan’s an old friend and I hurt for the way he was forced out of CBS News, which was with little class,” Koppel said. “He’s had a long and successful career. I’m sure the story he did was much more correct than incorrect, but if there was something wrong with it, I understand why he had to be let go.”