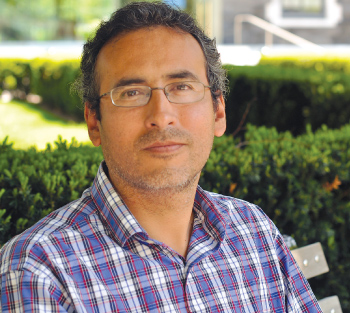 Erick Rengifo, associate professor of economics and director of the Center for International Policy Studies, researches the movement of capital in developing countries.
Photo by Patrick Verel

In 2008, Erick Rengifo, Ph.D., was walking through the highlands of Peru, 30 miles away from the nearest city, when he heard a distinct trill. Glancing around to see where it was coming from in such a remote place, he saw a woman who was guiding a cow down the road retrieve a cell phone from the folds of her skirt and answer it.

In order to serve big cities in developing countries like Peru, phone companies have put up antennas in the more mountainous regions of the country, where many poor rural communities are located. In a fortuitous quirk of technology, the cell signal is stronger in those poorer communities.

Rengifo, associate professor of economics and director of the Center for International Policy Studies (CIPS), says that this fact alone can help lift populations out of poverty. Using SMS technology available to even the most basic cell phone, both rural and urban citizens of developing countries can securely connect with a banking system that was formerly hard or impossible to access.

Rengifo is an expert on microfinance, a field that is steeped in the philosophy of “Give a man a fish and you feed him for a day; teach a man to fish and you feed him for a lifetime.”
That philosophy is part a larger CIPS research agenda encompassing microinsurance, investments, risk management, econometrics, and remittances. If there is a way to facilitate the smooth movement of capital into developing countries—both on the macro and the micro level—Rengifo has likely studied it.

In the world of microfinance, one of the biggest challenges to lenders is overcoming the risks inherent in lending to borrowers who have no credit history and who live in remote locations. This situation implies that the monitoring costs of these loans are higher, as it costs more to keep track of a microfinance client than to track a “regular” bank client.

Rengifo wants to harness the use of technology for his next microfinance project. In December, CIPS will launch Spesnova.org, a web platform that will enable entrepreneurs in remote locations to access local, regional, and world markets. He got the idea when he visited a microloan-funded bike repair shop in Peru that had gone bankrupt after the owner failed to expand his market—even though a large village full of potential customers was just three miles away.

“Once this guy here can easily communicate with those guys there, and say, ‘Hey, my shop is open for business,’ the market will be growing,” he said.

Spesnova.org (Spes Nova is Latin for “new hope”) will allow consumers to find locally produced goods for sale that they might not have been aware of, and enable financiers to make microloans directly to entrepreneurs much as they would through the established microloan site Kiva. Rengifo hopes the site will attract those entrepreneurs who will “teach a man to fish.”

“Studies show that the people new entrepreneurs hire are not only family members, but also neighbors. And if they live in a poor community, the neighbors are also poor,” he said.
“So this is a highly effective way of raising the people out of real poverty.”

Many logistical hurdles need to be overcome before the site can go live, said Rengifo. Shipping costs will need to be addressed, and transactions may need to be bunched together to keep banking fees low. To make sure money isn’t falling into the wrong hands, Spesnova.org plans to rely upon students from universities in host countries to conduct audits.

“This is really exciting. It is part of the social work that we need to do, and the impact can be seen easily,” he said.

In another part of his research agenda and with the support of the Global Association of Risk Professionals, Rengifo is researching how options (financial instruments that give the buyer the option to buy or sell an asset at a pre-specified price) can be used by central banks, with particular focus on emerging markets, to manage the volatility of their foreign exchange currencies.

A nation’s currency needs to be stable and competitive in order to help a nation thrive. Governments such as Peru traditionally stabilize their currency by using reserves to buy or sell American dollars. But how much is the right amount? Twenty-million dollars a day? Thirty-million? The question has bedeviled the central banks of developing countries for years.

Options, says Rengifo, give banks the ability to set their future currency price in a fluctuation band, allowing them to better manage their inflation targets. “We found that in order to achieve your goal, you need to succeed in the market. Central banks need to buy and sell dollars on the market, but in this case, with the use of options, they are going to know, for example, that [on a particular day]they need to buy$25 million,” he said.

“The next day it may be to buy $20 million, and then the next day it’s going to be sell 20. With the use of options and the hedging strategies derived from them, central banks are going to have a framework that is going to guide them in how much they should buy and sell to meet an objective.” With this tool, central banks will be contributing to the stability that all emerging market economies need to succeed in a globalized economy, he said.