skip to main content
Return to Fordham University
You are at:Home»Inside Fordham»Taking in Trash : “A Little Vicks in the Mask Works Wonders” 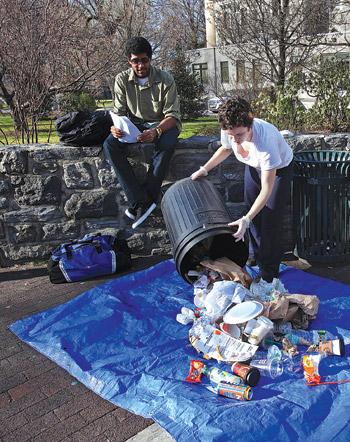 Archaeologists piece together the story of human history based on the material a culture leaves behind.

Pop culture has drawn a romantic picture of the field: diligent researchers sifting artifacts from a windswept patch of desert in the Middle East.

But what if our archaeological heroes were less “Indiana Jones” and more “sanitation worker”? Our artifacts more “McDonald’s” than “arrowheads”?

Fifteen Fordham students have signed up for the task of seeing what can be learned by studying the material society leaves behind today—our garbage.

The students are part of Fordham’s “garbology project,” working to catalog and analyze the trash found on the Rose Hill campus. 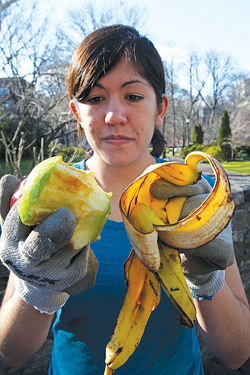 Kimberly Consroe, adjunct instructor of anthropology and faculty advisor to the project, said there’s more to the trash than meets the eye.

“Garbage is something that’s so closely correlated to modern people and what we know,” said Consroe, who consulted with Allan Gilbert, Ph.D., professor of anthropology and chair of the department, to get the project underway.

“What people say and what they do are totally different things,” Consroe said. “The material evidence speaks more loudly.”

The project was funded by a Fordham undergraduate student research grant and the United Student Government. John Anderton, a Rose Hill senior, is the garbology project’s ringleader, and wrote the grant to receive funding for the project.

Donning a backpack and sturdy gloves, Anderton treks around campus, supervising data collection during every shift.

Students began scouring campus trash in March. The process is straightforward, if unusual: students dump the contents of specific garbage bins onto a blue plastic tarp. They index every item in waterproof field notebooks, categorizing things like bottles, cans, wrappers, and discarded takeout containers by their material and brand.

After the garbage is indexed, students separate recyclable materials from other trash. Anderton weighs the trash to determine what percentage of the discarded rubbish could have been recycled.

For Anderton, who plans to attend the Marine Corps Officer Candidates School after Fordham, the garbology project has been a lesson in leadership as much as archaeology. He said he also thinks twice now about what he throws away.

“I have become much more aware of what’s recyclable and what’s not,” he said.

For the students involved, research lessons range from the scholarly to the highly practical.

“A little Vicks in the mask works wonders,” said FCRH senior Chris Pioch, a double major in anthropology and sociology.

Consroe said the trash has mostly been “typical American consumer garbage,” but there have been a few unique finds. A crew last month found a collection of soup bones in two different bins on campus.

Students also recently found the remains of what must have been a quite a breakfast—empty boxes for 18 eggs, pancake batter, and two boxes of sausage, all in the same bin.

Months of writing down details about every single item in the garbage provides a rich data set. The data will be used for several research projects over time. In addition to Anderton’s recycling question, the team will also measure the numbers of illegal cigarette packages imported from out of state found on campus.

“Anytime a student engages in real research, rather than simply reads a synthesis of work already done, they get a sense of how much time and work it takes to reach a conclusion,” said Gilbert.

Chris Wideman, FCRH ’12, said he was also motivated by the opportunity to help the community through the work.

“As much as I despise doing this, I really don’t mind spending two hours of my day considering how much it helps my community, my university, and my friends,” Wideman said.

Even the most difficult jobs have their upsides. But garbage collection is a dirty job, any way you look at it. Students said they have certainly attracted attention on campus, for better or worse.

“Sometimes that girl you have a really huge crush on gives you a weird look,” Wideman said.

Students continue data collection through the spring semester. Some written discarded items are being held in their Dealy Hall lab for future analysis—with all personal information redacted from receipts to ensure no one’s identity is compromised in future research projects.

Consroe said she has been thoroughly impressed by Fordham students’ approach to the work and willingness to roll up their sleeves.

“We’ve got people picking through garbage for free. Who does that but someone who understands the greater theoretical component of it?” she said. 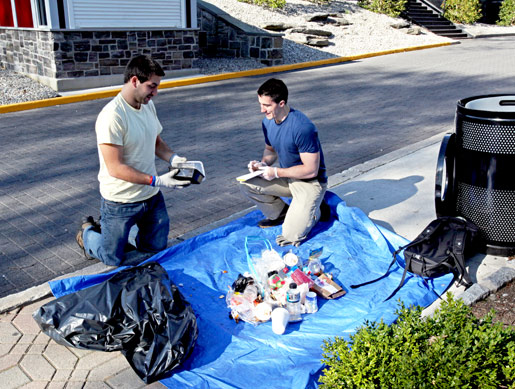 “We’ve got people picking through garbage for free. Who does that but someone who understands the greater theoretical component of it?”
Photo by Bruce Gilbert