skip to main content
Return to Fordham University
You are at:Home»Inside Fordham»Symposium Tackles Questions of Public Response to Poverty 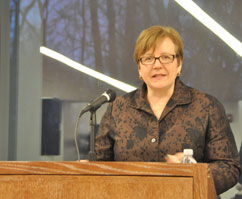 Christine Firer Hinze, Ph.D, notes that amidst all the talk of recession, the word “poverty” is never mentioned.
Photo by Patrick Verel

With the world economy mired in recession, being poor has become a real possibility for many people. This makes it a perfect time to examine key concepts of Catholic social teaching, according to a panel of experts.

“Poverty and the Common Good: New Ways of Understanding Collective Responsibility,” a symposium held on April 2 at Fordham’s Westchester campus, brought together panelists from the fields of law, business, social work and theology.

Moderator Peter Steinfels, Ph.D., co-director of the Fordham Center on Religion and Culture, opened the evening with an observation that the church’s position on the subject of private property has evolved over time.

“While Catholic social teaching has always defended private property, it has not, surprisingly, seen private property in a communal fashion, as entailing social responsibilities,” he said. “It has come, eventually, to speak of the universal destination of goods, and a preferential option for the poor, and most frequently, about solidarity.”

Kevin Jackson, Ph.D., professor of business ethics, said when it comes to charitable giving by businesses, two opposing schools of thought have emerged.

One side says businessmen such as Bill Gates don’t do nearly enough to help the poor, relative to their own wealth. Others believe that Microsoft has done an enormous amount of good simply through its existence.

Also, when a company decides that it should give money to a needy cause, the “how” and the “who” are fraught with great questions, Jackson said.

“If you’ve ever been in the position to give to somebody in your family that is in need, how often has it been that the person will say, ‘Let’s just treat this as a loan.’ In other words, they don’t want it to be an outright gift; they’d like to pay you back later on,” he said. “I believe that’s because they want to preserve some element of their dignity. Making a loan is not as generous as making a gift. It means less sacrifice for the giver, but it preserves the dignity of the recipient.”

Christine Firer Hinze, Ph.D., said there is irony in the fact that for all the talk about the current economic crisis, the word poverty is never uttered.

“It’s interesting to me that Barack Obama’s presidential campaign and current policy rhetoric is striking for its studied avoidance of the word poverty or poor. Everybody is in the middle class,” she said.

“His strategy is well-intentioned. He wants to help the citizens in our country back into a feeling of the common good by saying, ‘We’re all suffering here. We’re all worried. Let’s cast a net so we can all get help, including the poor.’”

The danger in this approach is that people who consider themselves middle class may only think of people in their own income bracket as those whom they should help, she said.

To show how Catholicism has championed the notion that society must provide a chance for families to create a decent life for themselves, Hinze cited John A. Ryan, a leading moral theologian, author and social justice advocate who died in 1945.

“What is a decent livelihood? For Ryan, it’s not just the bare minimum. It’s an ample minimum. It’s not being rich, either. He says it’s as much the things needed for sustenance that will enable a person to live in a manner worthy of a human being. That’s a very interesting idea,” she said.

Seeking solidarity with our fellow man is how to solve this puzzle, but Hinze acknowledged it would be hard.

“To practice getting into the habit of seeing us as interconnected is the biggest challenge right now for Catholics, but also for other citizens. We need communities to prod us to this. If no one is going to ask me or challenge me, ‘Am I only thinking of myself?’ I’m likely to keep doing it,” he said.

The symposium also featured Amy Uelmen, director of the Institute on Religion, Law and Lawyer’s Work at Fordham Law School; and George Horton, director of social and community development for the Archdiocese of New York Catholic Charities.

It was sponsored by the Fordham Graduate School of Social Service, the Bertram M. Beck Institute for Religion and Poverty, the Office of University Mission and Ministry at Fordham and the Westchester campus Office of Campus Ministry.