skip to main content
Return to Fordham University
You are at:Home»Inside Fordham»Symposium Looks at Communication in a “World in Quandaries” 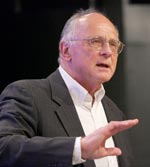 Calling general semantics “a sort of verbal peace movement,” Nicholas Johnson, former Federal Communications Commission (FCC) member and a visiting professor of law at University of Iowa College of Law, delivered an impassioned keynote address at the Fordham symposium, “The World in Quandaries: Coping with Controversial Communication In the Global Village-Personal, Social, National, Cultural.” The daylong symposium celebrated triple anniversaries: the 60th anniversary of the publication of People in Quandaries, by Wendell Johnson (father of the keynote speaker), a pioneering work in general semantics; the 60th anniversary of the founding of the New York Society for General Semantics; and the 8th anniversary of the founding of the Media Ecology Association.

Lance A. Strate, Ph.D., associate professor of communication and media studies and founding president of the Media Ecology Association, said Wendell Johnson “would be pleased to know that 60 years after the publication of People in Quandries, we are still talking about his book, and still reading his book. And that 60 years after its founding, the New York Society of General Semantics is still going strong.”

Johnson’s address, “General Semantics and War: From World War II to Iraq,” drew on his father’s work, describing the quandaries in the book’s title as “the causes and consequences of failures in interpersonal communications involving more than one person.”

“Sometimes such failures lead to law suits,” Johnson said, “but they can also produce domestic violence, gang members’ drive-by shootings, and the ultimate, and most tragic ‘communication failure,’ which we 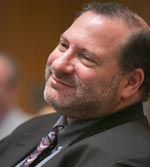 After asking what he described as “some rather basic questions that any general semanticist would ask,” about the Iraq war, Johnson said, “If [the questions]seemed so obvious to me—someone who claims no expertise in intelligence gathering, military strategy, law enforcement, or foreign relation—why were they not equally obvious to our executive and legislative leaders in Washington at that time? So much for ‘war.’”

In introducing Johnson, Paul Levinson, Ph.D., professor of communication and media studies and chair of the department, and associate chair of the masters program in public communication, said “We seem to have an FCC that was hatched in hell, that has no respect for the First Amendment. I think they don’t even know the First Amendment exists.” Levinson drew a sharp contrast with current FCC commissioners and Johnson, saying “…there was at least one person on the FCC who understood English.”

“Dad observed that humans are the only animal species able to talk themselves into difficulties that would not otherwise exist,” Nicholas Johnson said. “General semantics, born out of the ashes of World War 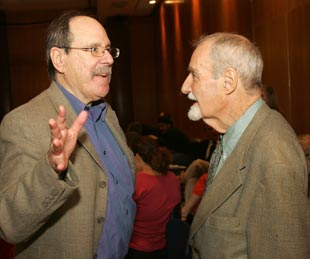 II, retains, now 60 years later, both the capacity—and therefore the responsibility—to do what it can to prevent the human species from talking itself into the even greater difficulties that would be represented by World War III.”

More of Nicholas Johnson’s writings are available on his website.