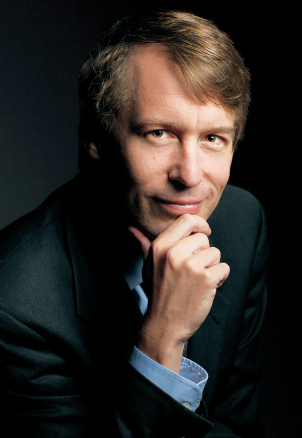 Carl Minzner looks at how legal disputes are settled in the Chinese courts..
Photo by Jon Roemer

To see the need for reform in China’s legal system, Carl Minzner says,
look to the local level, where judges sometimes resort to settling disputes by passing out cash to mollify the adversaries.
It is one example of a troubling trend in China, he said—that conflicts are being resolved not by law but by politics and a desire for expediency. Indeed, judges are often pressured to do whatever it takes to make disputes simply go away.

“Of course, not all disputes trigger these concerns. But this is, I think, the important trend in China today, with regard to conflicts ranging from unpaid back wages disputes involving migrant construction workers to compensation in land expropriation cases,” said Minzner, an associate professor at Fordham Law School and a specialist in Chinese law and politics.

Minzner spent several years traveling and teaching in Taiwan and mainland China prior to returning to the United States, where he earned a master’s in international affairs alongside his law degree. His writings span a variety of topics on Chinese law and society, but his biggest concern—and the topic of the book he’s writing—is the nation’s legal system, and the need for consistent procedures for resolving disputes.

China instituted a range of legal reforms in the 1980s and 1990s, but began turning away from them in the early 21st century.

“There’s a very insidious dynamic at work in China,” Minzner said. “In the pursuit of superficial stability, they are eroding some basic legal norms that they themselves had tried to establish.”

The reforms in the late 20th century were meant to foster economic progress and create systems for better responding to citizen disputes. Judges were required to have law degrees and had to decide cases according to statutes and rules of evidence; lawyers came to be seen as their clients’ advocates, not as agents of the state.

But then both political and practical problems emerged. Public interest lawyers got better at applying pressure on state authorities. And authorities faced the practical problem of enforcing paper judgments issued by young judges—fresh out of law school—when Chinese courts remained institutionally weak actors in the bureaucracy.

Around 2005, state authorities began to alter their course—shifting away from adjudicating cases according to law, ramping up intimidation of public interest lawyers, and promoting a new attitude about the role of judges.

“Instead of the earlier emphasis on judges deciding cases according to law, you see (Communist Party) cadres more and more involved in handling the truly thorny issues, such as groups of petitioners who are aggravated about their lands being seized,” Minzner said.

Official rhetoric began to cast the law as cold and mechanical and judges as father or mother figures who would resolve disputes in a benevolent way. The message to judges: “Don’t just sit behind your desk and write an opinion; you go and you ‘happify,’ you make the parties happy, you get them to resolve their grievances through whatever measures it takes,” Minzner said.

In practice, this has meant that some judges and party officials have relied on addressing mass grievances by distributing cash “to make everyone disperse,” he said. Such a practice undermines the rule of law by encouraging people to make a stir to get what they want, whether they have a legitimate legal complaint or not, Minzner said.

“Once you hear that other people got the money by virtue of doing this, do you think that you’re going to hire a lawyer to go through court?” he asked. “The state-society dynamic that’s taking place is really corrosive towards the long-term institutional evolution of China.”

Minzner said that he is not one to purport to know what the right direction is for China.

“But I do think that there’s some core element that’s fairly universal throughout many different systems: you want to create institutions by which you have disputes flow into the system—as opposed to out onto the streets.

“You can do that a couple ways: create political channels for people to have a voice in the decisions that affect their lives, and legal channels by which people think that they got a reasonably fair decision of their grievance.”

Minzner recognizes the need for China to fashion its own kind of legal and political apparatus. But he does see the need for reform in the political realm—specifically, changing the current one-party system to reduce the concentration of power in the hands of local party secretaries. “Absolute power corrupts absolutely,” whatever country you’re in, he said.

In the absence of substantive reform, he said, “you have a whole bunch of instability that’s building up under the surface.”

“You’ve got to have some kind of political or legal reforms that give people an institutionalized way to resolve their grievances and have a voice in the decisions that affect their lives,” he said.