skip to main content
Return to Fordham University
You are at:Home»Inside Fordham»Sudan’s Peace Agreements Topic of Conference at Fordham 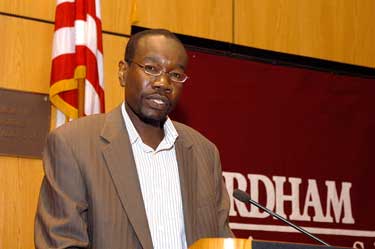 Although this May marked the two-year anniversary of the Darfur Peace Agreement (DPA), peace in Sudan is not truly experienced by those living in the region, a speaker said on April 16 at Fordham.

“The DPA was welcome because it was a way to stop the militias that were going out and killing people with absolute impunity,” said Ruth Iyob, Ph.D., associate professor of comparative politics and international relations at the University of Missouri-St. Louis. “Yet Darfurians find themselves bereft of any guarantee of peace.”

Iyob was one of eight panelists at “Sudan’s Peace Agreements: Progress and Challenges,” a conference hosted by the African and African-American studies department and the dean’s offices at Fordham College at Lincoln Center and Fordham College at Rose Hill.

“Since the second half of the 20th century, Sudan has been ravaged by a series of civil wars,” Idris said. “Despite the DPA, the crisis has only deepened. And three years after the adoption of the CPA, international attention has turned away from the north-south peace agreement and its failure may lead to full scale war.”

Suliman Baldo, Ph.D., deputy director of the Middle East and North Africa program at the International Center for Transition Justice in New York City, said by and large, the CPA has allowed Sudan to transform itself into a democratic government.

“But in the situation of Darfur, it was an international community response,” Baldo said. “It was a major humanitarian operation that left little focus on the root of the problem. The DPA was an illegitimate child of very unfocused approaches.”

Dr. Akec Khoc, a Sudanese native who is deputy permanent representative for the Permanent Mission of the Republic of the Sudan to the United Nations, said though the CPA has implemented peace in the country, it is not occurring at the right pace.

Militias who don’t respect the peace agreement are still operating in Sudan because armed forces that were promised in the peace agreement have yet to be formed, Khoc said. Other issues, such as the Sudanese government’s unwillingness to reopen old wounds by asking questions about ethnicity and religion in an upcoming census, also impede the advancement of peace, Khoc said.

During a question and answer session, a man in the audience suggested the CPA is “just a paper” and suggested scrapping it altogether and starting over from scratch.

Idris said such an action would cause the country to disintegrate.

“The best thing we can do is improve upon what is lacking, not throw it away,” Khoc said.

Iyob compared the CPA to the United States Constitution.

“That paper said, ‘All men are created equal,’ yet some of the founding fathers did not believe that since they owned people as property,” Iyob said. “But did that make it invalid? No. It laid the foundation for what later led to the civil rights movements and other advances in this country.”