In April of 2008, Craig Frank, Ph.D., an associate professor of biology and a mammalian ecologist, was giving a lecture at Albany’s New York State Museum when officials from the New York State Department of Environmental Conservation approached him. 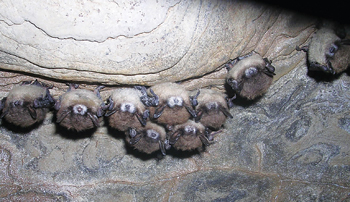 These bats in a cave have white nose syndrome.

They were alarmed by erratic behavior of bats resulting from white nose syndrome, a fungus that grows on the nose, wings, and ears of bats, and they wanted his help.

“Basically, they asked me to come with them on the spot,” Frank said.

Within days, Frank was standing in a mine with state biologists examining ground zero for what was becoming an epidemic decimating the bat population in the Northeastern United States.

Today, it is estimated that 95 percent of the state’s affected species are already wiped out, a rate that could make some Northeastern bats extinct within less than two decades.

Because nearly 70 bat habitats in the state are closely monitored every two to three years, biologists discovered the problem early. White nose syndrome was discovered in the Albany-Kingston area, when bats that should have been hibernating deep in the caves and mines were staying close to openings, and flying outside during the daytime.

The studies found that the fungus is killing the bats by arousing them early from their torpor. The disruptions, said Frank, burn an inordinate amount of body fat, which bats need to survive the hibernation period.

Normally, bats sleep from 15 to 20 days at a time during hibernation. When the fungus was more severe, they woke up more frequently—sometimes as often as every seven days.

“Bats eat insects and there aren’t any insects until April,” said Frank. “Because they were coming out every seven days, they depleted their body fat reserves by late January or February, flying around looking for insects when there weren’t any.”

Frank is continuing to research white nose syndrome, but has narrowed his focus to just two species of New York’s bat population: the little brown bat and the big brown bat.

The studies’ findings have been published in Living in a Seasonal World (Springer, 2012), and in the June 2012 edition of Public Library of Science One.