skip to main content
Return to Fordham University
You are at:Home»Inside Fordham»Students Honored for Academic Accomplishments at Ceremonies 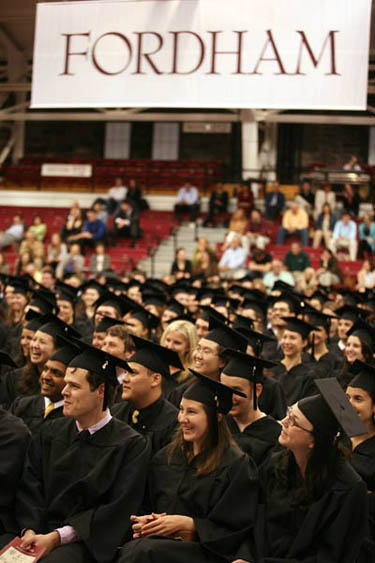 Some of Fordham College at Rose Hill’s most accomplished graduating seniors were feted at Encaenia held in the Rose Hill Gymnasium.
Photo by Michael Dames

Fordham University honored some of its most outstanding graduating seniors in May at Fordham College at Rose Hill’s Encaenia ceremony and the College of Business Administration’s Awards Night.

The two annual events, held on May 17 at the Rose Hill campus, drew large gatherings of family and friends to celebrate student accomplishments that ranged from membership in honor societies such as Phi Beta Kappa to winning Fulbright Fellowships and other scholarships.

In all, FCRH honored more than 200 and CBA nearly 100 students for their academic excellence and service to the University.

At the CBA ceremony, held in Keating Hall, Dean Donna Rapaccioli presented medals to students in fields ranging from accounting and finance to marketing and human resources received medals for their accomplishments during their undergraduate years. CBA also presented students with a number of awards and recognized members of its seven honor societies. Laura Greenwood delivered the salutatory address and Danielle Cirrincione was the graduating class’s valedictorian.

At Encaenia, held at the Rose Hill Gymnasium, Brennan O’Donnell, Ph.D., dean of FCRH, presented the College’s two most prestigious honors, the Claver Award and the Alumni Association Award. Grace Carlson was awarded the Claver Award, which is named for St. Peter Claver, an 18th-century Spanish Jesuit. The award is given by the Jesuits of Fordham to an FCRH senior who exemplifies the University’s dedication to community service. Carlson, from Ramsey, Minn., majored in theology.

Prescott Loveland, meanwhile, was selected to sit in the honorary Fordham chair as the recipient of the Fordham College Alumni Association Award. The chair is presented to a student who exemplifies the Fordham spirit of excellence in academic, service and extracurricular achievement. Loveland, from Brick Township, N.J., majored in American studies with a minor in philosophy and a concentration in American Catholic studies.

In her valedictory address, Megan Tosner told the gathering that she lost three close family members during her years at Fordham and in light of those painful experiences thanked all the families for their support of the Class of 2007.

She quoted a passage from Austrian psychiatrist and Holocaust survivor Viktor Frankl’s Man’s Search for Meaning (1946) that reads, “Everything can be taken from a man but one thing: the last of human freedoms—to chose one’s attitude in any given set of circumstances, to chose one’s own way.”

“In my own family,” said Tosner, who majored in English and American studies, “we learned that this liberty is crucial, for it meant that we could not—and would not—be defined by circumstances beyond our control. I believe that I can speak for all the graduates when I say that this type of familial support has sustained us these past four years and all those that have preceded them. Without you we would likely not be in the place that we are, but we would also not be the people who we are. For that, we cannot thank you enough.”