skip to main content
Return to Fordham University
You are at:Home»Colleges and Schools»Fordham College at Rose Hill»Students Helping Students: Finding a Lifeline in Academia

Madiha Baig vividly recalls an anxious time from her first semester of freshman year. The commuter student had developed an interest in pursuing a difficult combination of a business major and a pre-health program, but found there weren’t enough hours in a week to get through several 40-page chapters of dense, scientific jargon with any clear understanding of the concepts she’d be tested on.

“I was reading the textbooks straight through in order to do well, making lists of what to finish and crossing things off when they were done,” said Baig, now a sophomore at Fordham College at Rose Hill. “It seemed organized, but did I actually understand it?”

When it took her two full days to read seven chapters for a biology test, it became clear to Baig she needed to either cut back, or regroup and seek help on how to achieve her ambitions.

Through Fordham’s Collegiate Science and Technology Entry Program (CSTEP) office, Baig was introduced to Julia Escobar, then a Gabelli School junior, as someone who might be able to offer advice. Like her, Escobar was focused on completing a pre-health concentration with a major in business. When facing her own workload worries, Escobar had heard the “cut back your course load” suggestions from counselors. But she wasn’t compromising, and she advised Baig to stick to her dream, too.

“Julia took me in and said, ‘This is what it is going to be like,’” recalls Baig. “She told me, ‘Don’t let people put you down and say you can’t do it, because it definitely can get done.’ She gave me a 4-year plan on an Excel chart of how everything would go.”

And that, says Baig, was all in their first meeting. “She didn’t even know who I was!” 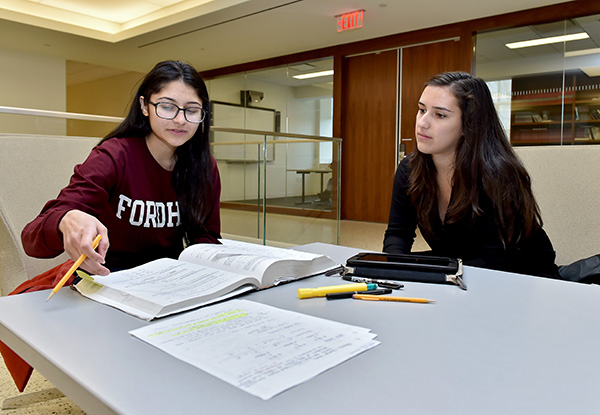 Over the next few months, Escobar helped guide Baig on what programs to apply for in the summer, how to get recommendation letters, and even what classes she should take and what clubs to join.

“Ultimately, I was her peer-peer resource, giving her all my knowledge so she could have a more seamless college experience,” said Escobar.

Fast forward one year, and Baig and Escobar speak gratefully of their mentor-mentee relationship and the successes it has brought them both. While the C-STEP Summer Scholars experience gave them a bit of common ground amid a student population of 15,000, staying friends has been a matter of mutual respect and admiration, the students say.

“Julia had done everything I was trying to do,” said Baig. “And she understands in a different manner than the counselors. She sees things from the perspective of a student who has walked the same path.”

From One Student to Another

You could say the importance of student-to-student support at a university is exemplified through Baig and Escobar’s story. Both were standouts at their high schools who struggled upon reaching college. Baig was a native of the Bronx who attended the Manhattan Center for Science and Math in Spanish Harlem; Escobar attended a large suburban public high school in Arvada, Colorado.

“I was valedictorian, and it was no big deal,” said Escobar. “I didn’t study much. So I come here (to Fordham) and it was like, ‘oh wow, this is tough.’ In my first semester biology, I was getting D’s across the board.”

Not one to be told she can’t achieve, Escobar took the matter into her own hands and sought out ways to raise her performance. With an app called Quizlet, she began to concentrate on trying out the scientific concepts through problems rather than reading through the material, a strategy she also passed on to Baig.

That and other strategies have worked for them both, academically. Escobar is graduating with a 3.76, and Baig’s biology scores, which she says had been in the 80s, moved into the 90s when she began to incorporate Escobar’s suggestions. She has a 3.6 overall presently.

This is not to say that it’s easy, by any means, the students emphasize. Escobar and Baig both carry heavy credit loads: Escobar, to complete a double major at the Gabelli School, has averaged 20 credits a semester; Baig has averaged 18 to 20 per semester in her combination pre-health and economics coursework at Fordham College at Rose Hill.

More important than academics has been building peer networks, said Escobar. She, too, has sought support from other students who are pursuing an equally rigorous academic schedule. As a junior, she co-founded the Business Innovations in Healthcare Club (BHIC), which consists of students engaged in any kind of business and pre-health curriculum. Escobar got Baig involved, and next semester Baig will serve on their executive board.

“We are the total nontraditionals in the Gabelli School,” said Escobar of the BHIC students. “On the business side, many students don’t understand that there are not just financial services at banks; there are also financial services at hospitals. Healthcare business administration is one of those things that is completely overlooked and that is not the sexiest of professions, but is a great profession.”

The admiration that has developed between the two women has enhanced both of their college experiences, they said. On a recent weekend, Escobar took Baig along with her to “Impressions Day” at Columbia College of Dental Medicine, which she will be attending next year after she graduates on May 21. She wanted to give Baig the chance to see if she might have an interest in dentistry.

She describes Baig as “sweet and kindhearted” in a way that she says has helped her be a more conscientious person.

And Baig says she is inspired by Escobar’s energy, generosity, and willingness to help in ways that only another student could.

“I’ve had a lot of support from adults,” said Baig, “but I feel like when it comes from a student it’s more of a practical situation.”