skip to main content
Return to Fordham University
You are at:Home»Inside Fordham»Students Find Lessons Outside the Classroom 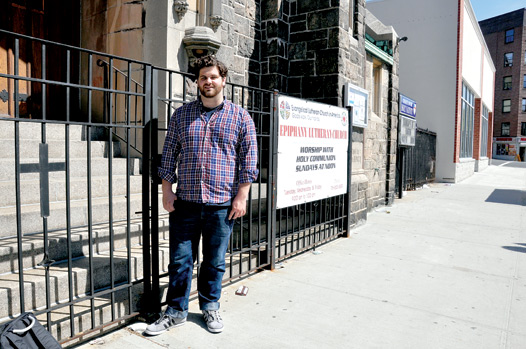 Stephen Ross, pictured in front of the Epiphany Lutheran Church on Bainbridge Avenue in the Bronx. Ross is a graduating senior with hundreds of hours of community service.
Photo by Janet Sassi

For the past four years during the academic semesters, Stephen Ross, FCRH ’14, has risen each Saturday and walked a mile to the Epiphany Lutheran Church on Bainbridge Avenue near the Bronx’s Norwood section. There, he and several other Fordham students have regularly mentored a dozen elementary and junior high school kids from the area’s public schools.

The New Hampshire native still recalls getting his first taste of the Bronx when he was a prospective student: while he was riding a city bus with his mother, a young mom trusted Ross’ mom—a perfect stranger—to hold her baby.
“Everybody says ‘the Bronx is dangerous,’” he said. “But there’s a real community here, and it’s complex.”

Ross is one of many students graduating with hundreds of hours of community service, much of it overseen by the University’s Dorothy Day Center for Service and Justice. For Ross, the experience has brought an understanding of one of the world’s most diverse communities.
For Mia and Madison Davis, two young girls whom Ross has mentored, and for their mother, Stephanie Jasmin, the weekly mentoring program has brought a supportive environment in which the girls can feel okay about asking for homework help, or just being themselves.

“They remind the kids that … it’s always OK to need help with certain subjects,” Jasmin said. “They never get impatient with them. They’re all very nurturing, every one of them. It’s comfortable.”

Aside from helping Mia, Madison and others with their schoolwork, the Fordham students organize activities and outdoor games. They also schedule more structured tasks, such as leadership exercises and craft making. Field trips, movie outings and a late lunch are often on the agenda, too.

The team helps many of the kids mediate problems, whether the issues be among one another, with parents, or at school.

During the 2012-2013 academic year, more than 7,000 University undergraduate and graduate students volunteered for service, according to statistics kept by the Dorothy Day center. Approximately 5,200 of those did their service in low-income and marginalized communities, racking up 467,817 hours.

Much of that work was done in the Bronx, where community service by Fordham students has been on the rise.

“That combination of analysis and reflection with their service helps students understand the inequalities that they see in the community and helps them understand what it means to be a Jesuit man or woman for others,” Lobo-Jost said. “We’re also there to learn from our neighbors in the community.”

Ross said the program has created a chance for him to make a difference in his adopted home.

“Our biggest focus is building relationships, getting involved,” said Ross, who will start law school in the fall. “It’s been an awesome way to get to know the Bronx. Some of these kids I’ve known for four years. And I’ll stay in touch.”

About 10 years ago, the program teetered on the edge of extinction. A small budget funded by a national organization, which paid for activities and supplies, was phased out. But a group of University students set out to raise money and succeeded in restoring the initiative to vibrancy.

Ross said the program’s survival is important—both for the young residents and for Fordham students. For Ross, an American Studies major, it has given depth to an interdisciplinary curriculum that encourages the cultivation of a critical mindset. That means he has developed a discerning eye as to the more complex challenges that might befall families in the Norwood neighborhood, where the median household income hovers around $32,000.

“I’d definitely say the mentoring program has put a human face on issues we talk about so much,” said Ross, who will attend the Benjamin N. Cardozo School of Law starting this fall.
Jasmin, who has a degree in social work from Adelphi University, said that by building relationships with students who are not that much older than they are, her kids are also learning something—the value of education.