Following in the Footsteps of a Giant: 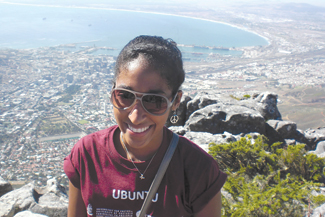 Leilah Peralta, FCRH ’13, above, attended the Ubuntu program in 2012, where she blogged about it at http://leilahinsouthafrica.blogspot.com.
Photo courtesy Leilah Peralta

As they prepared to travel to South Africa in January for this semester’s Ubuntu service learning program, Fordham students looked forward to a unique opportunity: helping to shape the legacy of Nelson Mandela in his own homeland.

The death of the former South African president and Nobel Peace Prize winner in December has prompted not only an extended period of national mourning, but also widespread debate about the meaning of his life, noted Booi Themeli, Ph.D., a Fordham economics professor and director of the Ubuntu program.

“The passing on of Nelson Mandela is a huge turning point for the country,” said Themeli, who grew up in South Africa under apartheid. “[This] will be the time when everybody is trying to say, ‘Oh, this is the legacy of Nelson Mandela. This is what Mandela wanted to see in our communities.’ So Fordham has a unique opportunity to be part of that change.”

This is the third year of the Ubuntu program, one of many collaborations between Fordham and the University of Pretoria begun in recent years.

Students were inspired to be serving in South Africa in the wake of Mandela’s passing.

“I think that South Africa’s really refocused on (Mandela’s) messages, so I think it’s a great time for us to be there,” said Anna Lynott, a Fordham College at Rose Hill (FCRH) junior who expected that the Ubuntu program would draw more attention this time around.

In the words of FCRH junior Bryan Galligan, “Just because he’s dead, I don’t think that means that he’s stopped leading, and I think every South African feels that responsibility on their shoulders. I think it’s a call. I’m really looking forward to being able to be there and help respond to that call, if you will.”

In between courses at the University of Pretoria, Fordham students will take part in a variety of service learning projects related to computer literacy, early childhood development, education, recycling, agriculture, or other areas of need.

The students will make excursions to sites from Mandela’s life, such as Robben Island prison, where he was held for most of the 27 years he spent in captivity. They’ll also visit Mandela’s former home in Soweto, where they will hope to understand more about Mandela and the people who played a major role in his life, said Stephen Freedman, Ph.D., provost of Fordham. 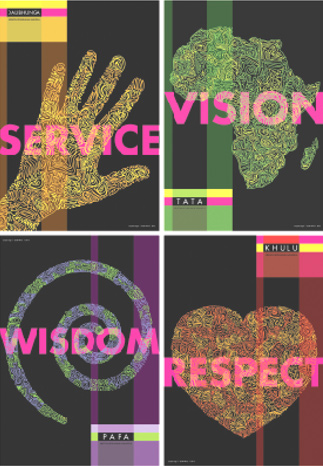 Prints from the Mandela Ubuntu Series, designed by Jacques Lange for the Mandela Poster Project© and displayed at the University of Pretoria last summer when the Ubuntu program and others celebrated the activist’s 95th birthday.

They include Peter Magubane, who worked as Mandela’s photographer, and his daughter Fikile Magubane, South Africa’s ambassador to Spain, who has been instrumental in shaping the Ubuntu program, Freedman said.

“Fordham is proud to be taking part in this historic moment of transition, when the people of South Africa are mourning Nelson Mandela, honoring his memory, and pondering his legacy,” Freedman said. “We expect this semester to be an exceptionally rich time for our students to pursue service learning in South Africa, given that the example set by this noble, selfless world leader will be so fresh and prominent in the public mind.”

He emphasized the importance of the support from the program’s partners, the Jesuit Institute of South Africa and the Desmond and Leah Tutu Legacy Foundation. During a visit this month, he planned to meet with the foundation’s executive director—the Rev. Mpho Tutu, daughter of Archbishop Desmond Tutu, one of Mandela’s closest friends—about making the program even more enriching for students and further integrating the Ubuntu program into South Africa’s communities.

Freedman said he also plans to meet with the Jesuit institute’s leadership about emphasizing the program’s spiritual aspects—particularly the spirit of reconciliation exemplified by Mandela, and its importance for resolving conflicts around the world.

A few of the students said they’re interested to see how their perspectives on Mandela compare with those of South Africans. Junior Erica DePalma looked forward to learning how South Africans view the forgiveness and reconciliation that Mandela practiced when he became president.

“Not everyone in the country [was]able to experience that firsthand, so it is going to be interesting to see what their perspective is,” she said.

And junior Jeffrey Coltin looked forward to being in South Africa during this spring’s national elections, in which different parties are both claiming to carry the message of Mandela.

“He was not just a president but a revolutionary figure, and a father figure for the country,” Coltin said.