skip to main content
Return to Fordham University
You are at:Home»Inside Fordham»Student Meets the Historical Jesus at GRE 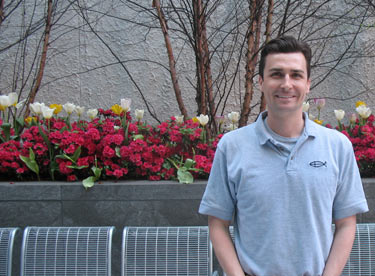 Brian Pinter grew up Catholic, studied theology in college and worked as a high school religion teacher. But it was his graduate work at Fordham that gave him an arresting new view of the Bible.

He learned more about the historical Jesus, and how the Bible could be read in ways that draw people to be closer disciples of Jesus. It was a new perspective for Pinter, who had always focused more on Catholic theology than on the Bible itself.

“I really discovered this love for biblical scholarship” at Fordham, he said. “It’s some of the best education I ever had.”

It was just three years ago that Pinter was working as a professional firefighter in Fairfield, Conn., and pondering his career direction. Since enrolling in the Graduate School of Religion and Religious Education, he has found a new sense of mission.

He aspires to add another advanced degree to the master’s in religion and religious education that he has earned at Fordham. His next project is learning ancient Greek and biblical Hebrew, while continuing his current job as director of campus ministry at Regis High School in Manhattan.

He will also keep speaking at area churches about the Bible and the historical Jesus, passing along the knowledge he picked up at Fordham. In particular, he credits two eminent biblical scholars for the things he learned—Addison Wright, S.S., and Jerome Murphy-O’Connor, O.P., both of whom formerly taught at Fordham.

Pinter has spoken at several area churches, starting with the Oratory Church of St. Boniface in Brooklyn, which he contacted at a colleague’s suggestion. He gave a six-session lecture series that was so popular he was asked to come back this spring.

His talks have shown him how hungry people are to learn more about Jesus.

“They want to know who he is, and they want a way to access him in the text” of the Bible, Pinter said. That interest stems from their faith, he said, but also from broader popular interest in the life of Jesus.

“They want to know, and I think it’s important that they have the tools to be able to evaluate everything they’re being fed out there,” he said. “I find that … these Bible studies invite them to read the text, sometimes for the first time, in detail, and to really spend some time with these stories and these events in Jesus’ life, and to ponder them—what’s going on here, what is being said, what is Jesus saying, can we meet Jesus face-to-face as we read this text?”

These questions were far from his mind three years ago, when he was working as a firefighter and yearning for something beyond his comfortable job. His Catholic roots run deep—he attended St. Joseph’s Preparatory School and St. Joseph’s University in Philadelphia before working as a high school religion teacher in New York.

He turned to firefighting because he wanted to try something new, and because some of his fellow faculty members—retired police officers—suggested the civil service.

He held the job in Fairfield for more than three years. It was a valuable detour for a few reasons—for one, he met his wife, Jessica, through a friend at the fire department, and she encouraged him along the path that led to Fordham.

“In a sense, even though it was a zigzag path to get to this point, retrospectively I’m grateful to have gone through it,” he said.