The Gabelli School’s Student-Managed Investment Fund has done an admirable job with the $1 million of the University endowment it was charged to manage.

The fund outperformed its blended benchmark for both the fall semester and the year to date, said James R. Kelly, lecturer in the Schools of Business and the fund’s adviser.
For the semester through November, the fund was up 6.18 percent compared to the benchmark’s rise of 5.7 percent. For the full year 2013, the fund earned 13.49 percent to the benchmark’s 11.10 percent.

In terms of asset classes, the fund overweighted equities and real estate, and underweighted fixed income, foreign exchange and commodities. Students thought that the Federal Reserve would not taper its economic stimulus mechanisms between September and November. They were correct, and made large gains in the stock market.

In terms of specific stocks, the team’s smart picks included Phillips 66, Disney, Lorillard, and Pentair, which averaged a return of more than 17 percent.

The managing directors noted in their end-of-semester report that fall 2013 offered them enough surprises—from Fed decisions to the government shutdown—to provide an important lesson.

“The main takeaway is that it is always better to identify undervalued sectors and find investment ideas there rather than try to predict the overall market,” they concluded. 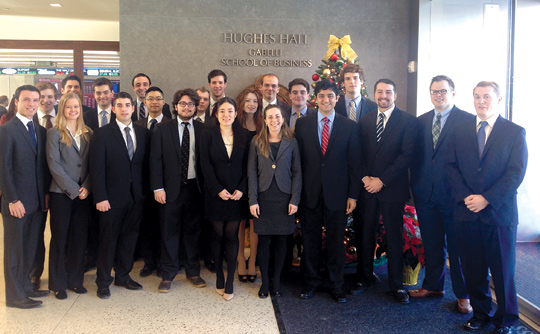 Alexis Summit, fifth from the right, front row, Muhammad Sarwar, fourth from right, and Dan DiDomenico, third from the right, managing directors of the Gabelli Student Managed Investment Fund, along with their fellow classmates.
Photo by Stephen Hearn