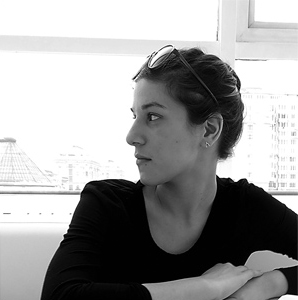 When she’s not studying for her classes in marketing, Adriana Krasniansky, a junior at the Gabelli School of Business, is devoting her spare time to an unusual interest: Trying to save her homeland.

Krasniansky, a native of Ukraine, helped found the collective The Group for Tomorrow’s Ukraine in November in response to the political crisis triggered by former Ukrainian President Viktor Yanukovych’s rejection of a trade agreement with the European Union.
Through their website and social media, the group hopes to creatively and accurately relay events transpiring in Ukraine to an English-speaking audience.

While Krasniansky was studying abroad at the Fordham London Centre at Heythrop College last fall, she got a text from a friend who “asked why I wasn’t in the Ukraine” in solidarity with her people.

“I said I have finals and I had work, and wasn’t able to go over, and he told me this is a once-in-a-lifetime opportunity, and its kind of our civic duty as informed Ukrainian-Americans,” she said.

Krasniansky, a former intern at the United Nations Department of Public Information, did make it to Ukraine in December, along with a filmmaker from DePaul University. Together they interviewed local experts and leaders—including Senator John McCain of Arizona, who was visiting Kiev to show support for Ukrainians protesting Yanukovych’s actions. Their reporting from that trip is being made into a documentary.

Recently, the group has commissioned some university professors to provide analysis of the developments there. It has also sponsored talks at three U.S. colleges on the subject.

Although the initial coverage of the group focused on the scuttled trade agreement, Russia’s recent annexation of the Crimean Peninsula has shifted that issue to the foreground.

For Krasniansky, who plans to return to Ukraine in the summer, the country represents not only her roots, but also an opportunity for entrepreneurs who have been taught at the business school to look abroad.

Part of what makes the country’s descent into chaos so painful is that a free and democratic Ukraine could be a catalyst for change toward a more democratic Eastern Europe and Asia. “It’s one of the epicenters of development in our modern world,” she said.

Adriana will join fellow Ukraine native Olena Nikolayenko, Ph.D., assistant professor of political science, at Fordham at the Forefront of the Conflict in Ukraine, a panel discussion on Tuesday, April 15 at the New York Athletic Club. For more information, visit the Fordham www.fordham.edu/alumni.