skip to main content
Return to Fordham University
You are at:Home»Inside Fordham»Student Gives Back for All GSAS Gave to Him 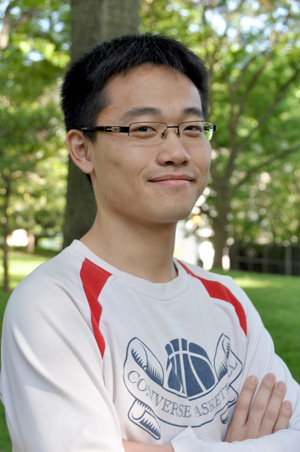 Haixiang Wang credits his scholarship and graduate assistantship with allowing him to study at Fordham.
Photo by Gina Vergel

It’s not that he’s got post-graduation jitters. After all, the Graduate School of Arts and Sciences (GSAS) student has already landed a job as a C++ developer for a company in Long Island.

“It’s going to be hard to go,” the 24-year-old said with a bittersweet smile. “The professors in the computer science department are unbelievable. The campus is beautiful and the administrators at the school—where I worked as a graduate assistant—helped me so much. I will never forget them.”

Wang, who goes by the nickname Sean, said he feels extremely fortunate to have earned a master of science degree in computer science. It far exceeded the educational expectations he had two years ago in his hometown of Tian Jin, China.

Wang had just earned a degree in electrical engineering from Huazhong University of Science and Technology. But there was only one problem; he preferred his computer science courses to his engineering studies. Following his instincts, he decided to go for an advanced degree in the field he preferred.

The next step was finding the right school. A handful of friends studying in the United States and Europe offered suggestions.

“One friend taking classes in New York City told me Fordham is a very good school, so I looked at the website and found research that interested me,” he said.

The next thing Wang knew, he was living in the Bronx, working toward a computer science degree and helping professors with research on performance modeling of disruption-tolerant networks.

None of this would have been possible, Wang said, without the Fordham Presidential Scholarships he received in 2008 and 2009, as well as his graduate assistantship.

“Because of our economic background, most students from China are not able to pay the whole tuition,” he said. “The scholarship and assistantship helped me a lot. I can’t say it enough.”

Wang said that the administrators in the GSAS office where he worked taught him “everything.” But he gave them something in return. He designed a database that tracks grants and funds, records and vacation time for roughly 20 employees.

He also gave back to the department in which he studies. Wang frequently tutored undergraduate students in computer science. Couple his service with his 4.0 GPA and it is easy to explain why he won this year’s Herbert W. Bomzer Award for Excellence in Computer and Information Science.

“I feel very happy,” Wang said. “I got so much assistance at Fordham. Not just in scholarships, but the opportunity to be paired with an alumni mentor. He gave me the greatest advice in looking for a job. All of this is why I will miss it here.”