skip to main content
Return to Fordham University
You are at:Home»Inside Fordham»Student Credits GBA with Opening Door to Success 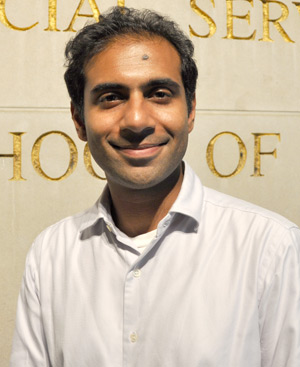 Ravi Misra knew that business school was the way to get the skills he needed for career advancement.
Photo by Gina Vergel

There is no denying that the down economy sent droves of people back to school in search of new careers. For Ravi Misra, it was what he kept hearing at his old job that pushed him to pursue a master of business administration degree at Fordham’s Graduate School of Business Administration (GBA).

Misra, 32, had a solid job at a financial publishing firm in midtown Manhattan. But after seven years of talking to money managers and chief executive officers, he realized he wanted to be in their world.

“I had been working with people and doing management stuff, but I knew I needed extra skills,” he said.

“There was no way to get them as quickly as I needed to make a career change without going to business school,” said Misra, who was born and raised in Queens. “I had always known about Fordham, so I applied.”

Misra, who will graduate with a 3.9 GPA, is a Fordham career-change success story. Just weeks before commencement, he began a new job in the analyst training program at Bank of Montreal Capital Markets’ equity research division.

“A lot of luck, hard work and great people later, I am doing what I wanted to do,” he said.

Misra is also a witness to the strength of the Fordham alumni network.

“A fellow Fordham student who was hired at MBO Capital Markets opened the door  for me,” he said. “It shows how amazing the Fordham network is, and how important it is to be friendly with fellow students and alumni.”

And how about that new job?

“I started right in the middle of earnings season, so it’s basically like landing in the middle of a hurricane and having no idea what rain is,” Misra said with a smile. “It’s challenging, but a lot of fun and I’m loving it.”

Misra said he wouldn’t be so confident had he not worked toward earning an MBA in accounting and finance at GBA.

“There is something about the Fordham ethic—it’s about working hard and giving back to the community,” he said. “It’s never really said in so many words, but it’s something that you definitely feel as you go through here.

“The professors are great. The students are great. The people you meet here and the conversations you have are a tremendous benefit,” Misra said. “It’s been a fast two years, and now I’m working in the field of my choice.”