Academic credentials, research experience, and leadership roles are all things that Hussein Safa acquired during his four years at Rose Hill. 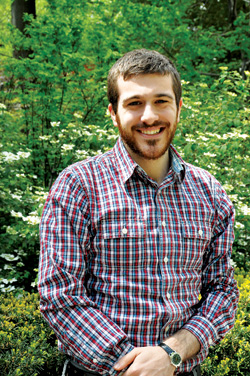 But if you ask him what stands out the most about his experience at Fordham, none of those will top his list.

Safa, a pre-med double major in biology and history, has devoted a large part of his collegiate experience to learning about and working with the Bronx community.

“The first thing I did was Urban Plunge, which introduced us to service, and I found that I really enjoyed working with people and learning about the bigger issues,” he said. “I felt a connection working with underprivileged people, because I went through that too, and now I’m in a state where I can… empower them.

“That drove me to pursue [service]and take it further, and not just leave my past behind me, but do something with it.”

Safa grew up in the war-torn city of Beirut, Lebanon, from which he and his parents emigrated one month before his 17th birthday. His sister and brother-in-law remained, along with a nephew that Safa has never met in person.

Though years of studying languages and watching American cartoons and sitcoms spared him the culture shock that many immigrants face, Safa said that transitioning to a new country was far from smooth.

“The difficult [part]was getting used to the fact that I’m not in Lebanon anymore, I’m in New York. The worries and problems you had in Lebanon don’t apply here. It took a year to get used to that,” he said.

“It’s still in me,” he added. “It shapes you, it changes the way you see the world.”

That worldview, he said, has instilled in him a love of service that has extended across his college career. Recently, he and five other students were recognized by the Dorothy Day Center for Service and Justice for extraordinary and consistent service during the last four years.

“Community service has become an integral part of my life and the way that I envision my future,” he said, as he considered his future following medical school. “The kind of medicine I envision practicing is community-based medicine, working with underprivileged and underserved people—people who don’t have access to health care.”

Before applying to medical school, Safa hopes to work for a year in a job that can further this newfound passion. One job on his list would allow him to work with refugees of war.

“I’m drawn to that because I had experience dealing with war, so I feel comfortable being in solidarity with people who also had those experiences,” he said.

Though a possible full-time job and, later, the exhaustive experience of medical school await Safa, these will likely seem like a break to him—after years of such activities as being president of the Laennec Society, president of the Fordham Club, and a volunteer emergency medical technician (EMT), all while commuting daily from Staten Island to the Bronx.

“I’m super involved and I get super tired, but I enjoy doing these things,” he said. “If I don’t get my feet wet now, I’m not going to get a chance later.”