The distance that Joseph Walters traveled from Norman, Okla. to Fordham for commencement is nothing compared to his journey from phone technician, to law school graduate, to chaplain. 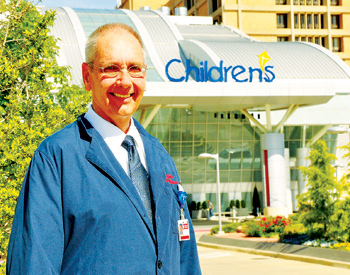 Walters, a dispute resolution lawyer who is married with three adult children and four stepchildren, had already made one major career shift when he enrolled in law school in the early 1980s, following 11 years as an AT&T phone technician.

His second came after he accepted an ostensibly ordinary request.

“Young friends of mine asked me to be the godparent to their daughter, and I said yes,” said Walters, a Queens, N.Y., native. “I went to the local Catholic church, and they said, ‘you should be a practicing Catholic [to be a godparent]…’ I’d stopped going to church when I was about 19.”

But Walters, who will earn a master’s degree in pastoral care from the Graduate School of Religion and Religious Education (GRE), doesn’t do anything halfway.

“If you’re going to commit to do something, you should do it,” he said.

He started attending Mass again, joined the Rite of Christian Initiation of Adults, or RCIA classes, and later became an instructor.

But finding his knowledge of church teaching outdated, he considered taking his spiritual education further.

The answer came in the Jesuit magazine America. He saw an advertisement for an online graduate program at Fordham (where a former Regis High School schoolmate, Joseph M. McShane, S.J., was president). Figuring that GRE graduate courses could bolster his knowledge of Catholicism, Walters enrolled in the faith formation certificate program.

But that, too, grew into another ambitious goal. One of his professors, assistant professor of pastoral counseling Lisa Cataldo, Ph.D., offered a suggestion.

“I was emailing back and forth with her about the future and my studies, and she said that there was a new program starting, an online master’s degree in pastoral care,” Walters said. “That sounded good—that I could get a degree and study further.”

He became a member of the first cohort of the online pastoral care program, and later learned from Cataldo about clinical pastoral education courses, through which he began working with patients at the University of Oklahoma Medical Center. Though Fordham students are only required to complete 100 classroom hours and 300 hours of a clinical rotation to receive credit, Walters enjoyed it so much that he completed four times the requirement.

“In the beginning, I was very intimated by the idea of talking to someone who was facing the ultimate questions—their own death, the death of a loved one, the serious loss of health,” he said. “I had to overcome my desire to fix things. I realized that I can’t fix everything, but maybe I can comfort people by joining in their pain.”

The experience, he said, has changed how he relates to people.

“Before I completed the Fordham program, many times I would deal with people instead of relating to them,” he said. “That’s been the gift of the program.”

After receiving his master’s degree (and, in August, applying for his chaplaincy certification), Walters will begin the doctor of ministry program.

“I envision some kind of hybrid between chaplaincy and my law training,” he said.

Though his destination is unclear, he is confident that he is traveling in the right direction.

“One of the beauties of what I was taught in the Fordham program is that it’s not necessary to have a completely coherent belief system. There can be tension and there can be conflict,” he said. “To accept that there are always questions and that everything is a developing process has been one of the things I learned.”