Karen Clayton’s research on student motivation represents more than a
capstone to a decade of assiduous study. 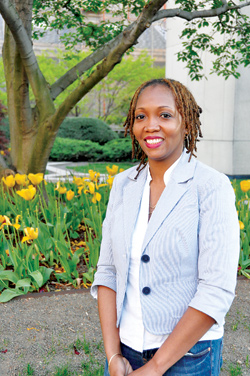 More than a decade after deciding to leave the finance world, Karen Clayton, GSE ’12, earns her doctorate in educational psychology this weekend.
Photo by Joanna Klimaski

It also captures a personal journey that has spanned both disciplines and oceans.

A native of St. Catherine, Jamaica, Clayton’s motivation to excel brought her from her home in the Caribbean to the Graduate School of Education (GSE), from which she is earning a doctorate in educational psychology.

She first graduated with a bachelor’s degree in management studies from Nova Southeastern University. But seven years in finance left her dissatisfied.

“Your career is most of your life,” she said. “There’s no sense in going to work miserable… If you’re going to do something, you should love doing it. I didn’t, so I changed.”

She decided to enter the field of psychology, where she felt she could help people directly. Hoping, also, to seek a new cultural experience, Clayton set her eyes on New York City and made the first, difficult step in starting over.

“It was hard,” she said of her arrival in America 11 years ago. “For the first couple of months, I was tempted to go back home.”

In addition to readjusting to college life at the City University of New York (CUNY), Clayton had to acclimate to the rapid pace of New York, a city so big that neighbors were strangers.

“I remember asking my cousin, ‘How can you live beside this person and not know them?’ And she said, ‘That’s how it is here.’ That was a culture shock for me,” she said.

Clayton obtained her second bachelor’s degree in psychology from CUNY York College, a master’s degree in counseling and personal services from GSE, and has now completed her doctorate.

For her dissertation, Clayton studied the motivations that drive Jamaican students to pursue education, because that population, she said, is overlooked in most literature about motivation.

According to Clayton, their motivations are largely societal. First, as a very religious population, Jamaican students desire to fulfill God’s purpose for them. Second, students understand that education can raise their low socio-economic status. Finally, the history of slavery in Jamaica offers many students the inspiration to overcome obstacles they face.

These motivations resonated with Clayton, too.

“I would say that my belief and trust in God has motivated me, as well as [being]from a low socio-economic status,” she said. “My sister has always instilled in me that if I want to rise above that, then I need to be educated.”

Even more so,though, Clayton said that her motivations for crossing the Atlantic are deeply personal.

“I wanted to prove to myself that I was capable of doing it.”

After graduation, Clayton aims to become a university professor to unite her passions for teaching and research—passions she said she discovered thanks to her two mentors, Akane Zusho, Ph.D., and Fran Blumberg, Ph.D., both associate professors of educational psychology in GSE.