Lynda Garcia took ten years off between high school graduation and college. The time off obviously paid off. 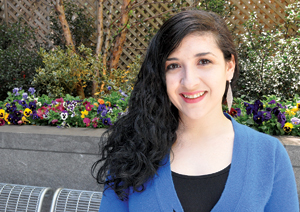 Lynda Garcia, Law ’12, was inspired by her mother’s illness to go back to school and earn her bachelor’s and law degrees.
Photo by Patrick Verel

She enrolled in Fordham Law’s evening division as a Stein Scholar for Public Interest, and will graduate with all the experience necessary to help disenfranchised populations navigate the courts.

She credits her renewed interest in going back to school to a close call that her mother had with cancer.

“Lawyers tried to certify a class action lawsuit for a medication she’d been on that was supposedly linked to the kind of cancer that she had,” recalled Garcia. “All this legal paperwork started piling into the house.”

Garcia’s mother kept asking her to explain it, and to help her navigate it, but Garcia said she “felt a little powerless” and eventually couldn’t help.

“I decided that I wouldn’t feel that anymore. I would go to school and learn law.”

Even before she was accepted as a Stein Scholar, Garcia knew that public service was going to be in her future; for her undergraduate thesis, she examined campaigns to implement living wage laws around the country.

At Fordham Law, she interned for groups such as the American Civil Liberties Union, the National Defender Service of Harlem, Public Defender Services of Washington D.C., and Bronx Defenders.

The clinics and externships really brought home the importance of the field.

“When you’re working with real clients on real cases, its not theoretical anymore, it’s not just an academic exercise. It’s real life,” she said. “It’s easier to do things when they actually matter.”

“It almost didn’t feel like school or work. I felt like these were amazing opportunities to be a part of something even bigger.”

In the college’s criminal defense clinic, Garcia represented clients in criminal court for misdemeanors such as trespassing or marijuana possession. What made an impression on her was how punishments are not always proportional to the crime.

For example, a client allegedly in possession of marijuana could, as a consequence of having this violation on his record, lose his electrician’s license.

“So it’s not just getting a ticket and paying a fine; it’s having these collateral consequences that are really horrible,” she said.

The project will challenge the police practice of selective enforcement of low-level offenses, such as trespassing, which police departments routinely use to target particular communities.

“The theory is they might be guilty of worse crimes, but what this practice is really doing is creating a police state in low-income communities of color,” she said.

Looking back, Garcia said law school was probably more challenging than she’d expected. But it was also more rewarding.

“The public interest resource center at Fordham is such a strong program, and I think without that resource, I don’t know if I would have had the outcome that I had in the end. Just in terms of the guidance, they were along with me the whole way,” she said.