It’s only about 300 miles from the Blue Ridge Mountains to Fordham’s Lincoln Center campus. 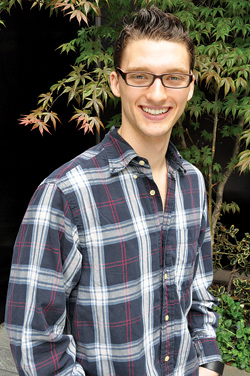 Chris Bloom, FCLC ’12, credits the Ailey/Fordham program with giving him the skills he needs to succeed as a professional dancer.
Photo by Patrick Verel

But for Chris Bloom, the distance between Middletown, Virginia (population: 1,265) and Manhattan may as well be more. Much more.

The crowds, the smells, and the noise were overwhelming for Bloom, who grew up and was home schooled on a 400-acre thoroughbred horse farm.

“I have a friend who helped design the Rose Theater at Jazz at Lincoln Theater,” said Bloom. “It’s a completely soundproof theater with less than half a decibel of street and subway noise. I used to ask her if I could go in there.”

Now when he goes home, he says he can’t wait to come back.

“A year ago, I walked out in the night back home, and there were no street lights because it’s the middle of nowhere,” he recalled. “And I was actually a little bit scared of the dark!”

Four years after arriving at Fordham, Bloom is earning a B.F.A. as part of the Fordham College at Lincoln Center’s (FCLC) partnership with the Ailey School.

Bloom had visited New York City as a child, but his first two years at FCLC were rough—the first because of the adjustment to the city, and the second because of the challenges of the Ailey program. In addition to his academic workload and two jobs, he estimated that he danced 40 hours a week. Tuesdays started at 8:30 a.m. and ended at midnight, with no break in between.

“I was looking around at my fellow students and going ‘man, if mine could just be like that guys’ major. That guy looks like he’s chill.’ So yeah, I was definitely thinking at certain points, this is too much. But I got through it,” he said.

Bloom knew he wanted to dance professionally from the moment he saw American Ballet Theater dancers perform in the movie Center Stage, at age 15. New York was a “given,” and the BFA program’s dual focus on dance and academics sealed the deal.

“I grew up in a family that emphasized learning and creativity, and the idea of not continuing my studies was terrible,” he said.

“They focus on technical dance and they give you repertoire. They bring in a wide range of choreographers, so I am leaving really well-prepared to dance a lot of different [styles].”

Bloom has been apprenticing with the Parson’s Dance Company. After working with choreographer Thang Dao at Fordham, Bloom has also signed on with Dao’s company to perform for two weeks this summer at the Perry-Mansfield Art Institute in Steamboat Springs, Colo.

More dancing roles await him in the summer and fall, and, as a freelance dancer, he’s also planning to model for art classes and work with ballet schools that need male dancers for partner classes.

His ultimate goal is to land a full-time contract with the Cedar Lake Contemporary Ballet.

“I think Fordham and Ailey have done a really great job of creating something that is really positively geared toward what we need as students,” he said.