skip to main content
Return to Fordham University
You are at:Home»Inside Fordham»State of the University: Sound 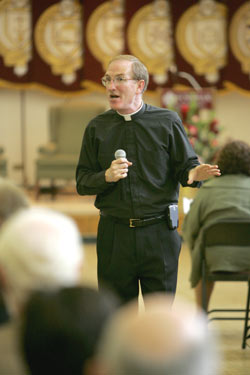 Joseph M. McShane, S.J., president of Fordham, delivered an upbeat State of the University Address at Faculty Convocation on Thursday, Sept. 14, in the McGinley Ballroom on the Rose Hill campus. In admissions and fund raising the news was overwhelmingly positive, and the University’s intellectual health is vibrant, if underappreciated by some media who rank universities.

In his introduction, Father McShane reported on three multi-year initiatives that have occupied much of the institution’s attention since 2003: the Middle States Reaccreditation, the Strategic Plan, and the Capital Campaign.

Early in the summer the Middle States Commission on Higher Education acted to “reaffirm accreditation, and to commend the institution for the quality of the self-study report,” Father McShane reported. The comprehensive work completed for the Middle States study served “as a firm foundation for the formulation of our strategic plan in the course of the 2005-2006 academic year,” he added. Turning his attention to campaign planning, Father McShane commended Vice President for Development and University Relations Albert Checcio for making “rapid progress on this front” with the hiring of a consulting firm, the drafting of a pre-case statement, and the analysis of our donor base.

In the area of University Life, Father McShane reported first on admissions. During the 2005-2006 admissions cycle, he said, the University received 18,111 admission applications to the traditional-age undergraduate colleges, a 19 percent increase over last year’s figures, with a “healthy” decrease of 4 percent in acceptances, down to 46 percent (8,414 acceptances) from 50 percent last year. While the average entering SAT for the Class of 2010 stands at 1202, down 6 points from last year’s average of 1208; the entering average high school GPA is 3.68; and the percentage of students in the top 10 percent of their high school classes rose to 39 percent.

“If we had a good year on the admissions front, we had a very good year in the area of development and University relations,” Father McShane said. “A total of $47.2 million was raised, a 49 percent increase over the previous year. We were aided substantially in our efforts by the work of the Law School.”

In its centennial year, the Law School raised $20.95 million for the year, up from $7.19 million the previous year. The Annual Fund brought in $4.95 million, up 5.4 percent from the previous year. Overall donor totals were also very good: University-wide there were 14,942 donors, up 9.7 percent over the previous year; undergraduate donors totaled 12,408, up 9.8 percent over the previous year; and Fordham’s participation rate reached 20.12 percent, up from 18 percent last year. These advancements should have a very positive impact on the University’s U.S. News & World Report ranking next year, which dropped by two points to 70 in the 2007 “Best Colleges” ranking.

The annual Founder’s Dinner raised $2.1 million, equal to the previous year’s total, and Jubilee Weekend was a success in both attendance (1,300 alumni, family members and friends flocked to Fordham campuses despite the rainy weather) and fund raising ($12 million total).

In the capital campaign, counting only the money raised since 2003 toward the total, the University has received over $104 million dollars. Based on that robust showing, the University is moving ahead with planning for the campaign, and Father McShane will present recommendations concerning its shape and final goal to the Board of Trustees in early March 2007.

Overall, the University plans to raise $50 million in 2006-2007; increase the Annual Fund to $5 million, and double that amount in the next five years; and increase alumni participation to 22 percent.

The president led his discussion of the University’s intellectual health with a brief overview of media rankings of so-called “best colleges,” annual scorecards that are received with much ambivalence by administrators and faculty who are all too familiar with the subjectivity and plasticity of criteria used to rank institutions.

“As you undoubtedly know by now, when U.S. News & World Report published its annual rankings of America’s colleges and universities a few weeks ago, Fordham slipped two places — from the 68th spot that we achieved last year—to 70th place,” Father McShane said, “the position that we occupied two years ago, but still up considerably from the 84th place that we found ourselves in three years ago.” He went on to say that the slippage occurred despite significant improvements in selectivity and alumni giving.

Father McShane also discussed the Washington Monthly guide to colleges, which bases its rankings and ratings on very different criteria than does U.S. News & World Report, with a heavy emphasis on such things as community service and character formation, as well as the degree to which a college or university serves first-generation students and students from families of modest means. Given those criteria, Father McShane said, “it is not at all surprising that Fordham fared quite well in that magazine’s pages. In fact, we rose to 41st place—up from last year’s ranking of 57.”

The news in scholarships and fellowships was less equivocal, according to Father McShane. “Last year, our students threw themselves into the competition for prestigious fellowships and scholarships with renewed vigor,” he said. “The hard work that they put into their applications paid off quite handsomely.”

Father McShane also praised Fordham faculty, who secured 58 grants with $15.6 million in funding in the past year. The Graduate School of Education had a particularly successful year, bringing in $4.5 million in new grant money, and is now carrying approximately $19 million in grants.

“On balance…I am happy to be able to report to you that the state of the University is sound,” Father McShane told the assembled faculty and administrators, “thanks to the hard work of all who love Fordham.”