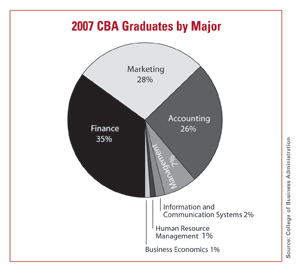 Additionally, survey results show that CBA graduates, who have a long history of excellent placement in accounting firms, are increasingly beginning to muscle their way in to New York City’s top finance companies. Members of the Class of 2007 were hired in large numbers by PricewaterhouseCoopers, Ernst & Young and KPMG, three of the Big Four accounting firms, as well as Goldman Sachs, Lehman Brothers and J.P. Morgan Chase & Co., three major global financial services and investment banking firms. Most of the new jobholders indicated that they had received signing bonuses, some up to $10,000.

“An important measure of the quality of a business school is the career placement of its students,” said Donna Rapaccioli, Ph.D., dean of CBA. “For us the news is good and getting better every year; it is something we pride ourselves on.”

CBA’s growing reputation in the financial services industry, Rapaccioli said, is something the college is determined to keep improving. “Five years ago,” she said, “we weren’t getting placed at all in some of these premier firms.”

The strong earnings power of graduates comes amid a surge in CBA’s rankings.

In March, CBA jumped 14 places in BusinessWeek’s annual ranking of undergraduate programs, to No. 34. The magazine also gave CBA straight A grades in teaching quality and job placement.

The rise in BusinessWeek’s rankings, Rapaccioli said, has also coincided with an unprecedented spike in CBA applications.

In fact, CBA experienced the largest percentage increase in applications among the four undergraduate schools and six graduate and professional schools, rising 37 percent during the past admissions cycle. Since 2004, applications have increased 95 percent and the college’s acceptance rate has dropped from 52 percent to 36 percent.