On Oct. 4, the 60th anniversary of the launch of Sputnik, Asif Siddiqi, Fordham professor of history, participated in a presentation at the Woodrow Wilson Center on “The Space Race and the Origins of the Space Age.” Working from newly declassified documents, Siddiqi explained how the space race “took off” in the 1950s.

“There’s been a bunch of declassifications on Sputnik. These have been going on for maybe the last 10 years or so, [and]in terms of the origins of Sputnik, a lot has come to light since the 50th anniversary.

“One of the things that I want to focus on is the idea of the space race itself, which we mark as beginning on October 4, 1957.

“Looking at these documents, the first thing that I think strikes us is that the space race really began even before Sputnik, in perhaps around 1955 or so.

“A key player in all this is Sergei Korolev, who is sort of the architect of the Soviet space program, a very leading designer in the ‘40s, ‘50s, and ‘60s [and]a space enthusiast as a young man. But in the early 50s, he was in charge of the ICBM (intercontinental ballistic missile) program, and really wanted to put something in orbit, [he]was fascinated by space, and there were like-minded people around him. But there was no really firm way to do so. But he had something that now we’re beginning to realize— a lobby of people around him, also space enthusiasts who were engineers.

“In 1954 . . . because they knew a lot of Soviet journalists, they flooded the Soviet media with speculative articles on space flight.

“A bunch of articles just started coming out in early ‘54, and into ’55. The interesting thing is, a lot of really powerful people began to take notice, especially of one article that came out, I believe, in April of 1955. This article [got]cited a lot in the Washington Post and New York Times, this Soviet, Russian-language article. It eventually makes its way into the CIA, and if you look at some the rationales behind the first U.S. satellite, it’s a complicated story involving freedom of space. But one of the things inserted into the very high-level documents like the 1950s National Security Council documents, is this article, which Korolev and his colleagues had orchestrated.

“There was nothing going on in the Soviet Union on space at this time, but this article [got]repeated and circulated a lot, and, as probably all of you know, in the end of July 1955, the Eisenhower administration announces they’re going to launch a satellite in a couple of years, it’s going to be a scientific satellite.

“There are all sorts of reasons that happens, but one of those I think is this Russian media thing. 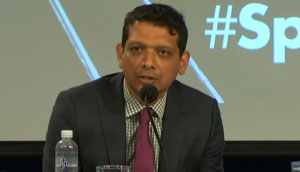 “As soon as the announcement happens, Korolev writes a letter to the Politburo on August 5, and he says ‘look, these guys are going to launch a satellite,’ and he attaches stuff from the New York Times and the Washington Post talking about the Russians launching a satellite. So it’s a circular argument.

“Three days later, on August 8, the Politburo meets, and they sign off on this, and Korolev gets his approval.

“There’s a kind of back and forth about what the Americans are doing, and the [Soviets] start a program to launch a much smaller satellite, which is the Sputnik that we know—the size of a basketball with antennas and a battery and a radio transmitter.

“Besides just being captivated by space, these guys needed something else. And that was competition: something to compete with and compete against, to advocate your position to the top-level leadership.

“Finally, they were opportunists in the sense that they were scientists and engineers using a moment to wedge into the policy process and get something done. The existence of a lobby, the ability to be opportunistic at a given moment, and the ability to leverage some sort of competitive aspect, I think, were in the mix already in the 1950s on the Soviet side. That’s why these declassifications of all these documents are so interesting, because they provide a view into things that we now see in contemporary space all the time.”

Listen to the entire presentation.