skip to main content
Return to Fordham University
You are at:Home»Inside Fordham»Sports Roundup 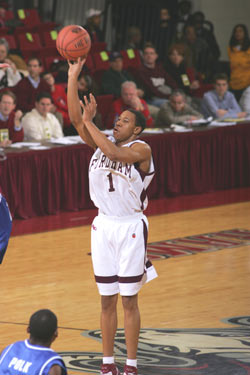 As the calendar turns to January, it means one thing for the Rams. It’s time to start Atlantic 10 conference play. After winning seven of their 12 non-conference games, including their last two, the men’s basketball squad carried over the momentum to conference play, winning four of their first six Atlantic 10 games of the year.

The Rams opened league play on the road, falling to George Washington (70-59) before picking up a win at Richmond (58-55). The Rams then came home to the Rose Hill Gym where they saw their home court winning streak snapped with a loss to Xavier (71-56) before they reeled off three straight wins, starting with a victory at Duquesne (71-59) and then two home wins over Jesuit rivals Saint Joseph’s (56-55 in overtime) and Saint Louis (77-68).

Junior guard Marcus Stout has been leading the Rams, averaging 18.7 points and 3.3 assists per game, shooting 58.8 percent from the field (20-34) and 60.0 percent (12-20) from three-point range, over the recent three-game winning streak. After scoring a season-high 26 points at Duquesne, he provided the game-winning basket with 4.2 seconds left in overtime to help the Rams upend Saint Joseph’s. For his exploits, Stout was named the Atlantic 10 Co-Player of the Week for the week ending Jan. 20.

Women’s Basketball
The Fordham women’s basketball team hasn’t had the same luck as the men’s team, dropping their first four conference games of the season.

Prior to opening the conference season, the Rams hosted George Mason University as part of Rams School Day, where children from Bronx schools were invited to see the matinee contest. The attendance for the game was marked at 1,529, shattering the previous home attendance mark for a Fordham women’s basketball game, which was 1,104, set on Jan. 5, 2002, in a game featuring Fordham and Stanford University.

Swimming
Following a training trip over the holiday break, the Fordham men’s and women’s swimming squads returned to action on Jan. 20 as they hosted the La Salle University Explorers. The Fordham women defeated La Salle, 152-83, while the Fordham men fell by a score of 142-101. 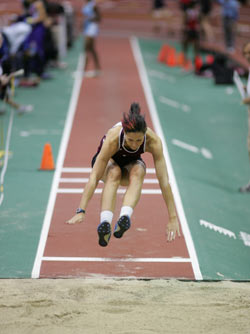 The Fordham men’s and women’s indoor track and field squads have been busy following the holiday break, hosting the Fordham Invitational and competing in the Gotham Cup and Yale Invitational.

At the Fordham Invitational, senior Kerstin Greene highlighted the meet by qualifying for the ECAC Championships in the high jump. Greene won the event, clearing 5′ 7″, while also placing second in the 60-meter hurdles in a time of 9.24 seconds. Sophomore Jackie Prevete also won the 5,000 meters in 18:19.57.

On the men’s side, the 4 x 800 relay team ofClifton Hilario, Peter Glackin, Matt Lowenthal, and Ryan Serkes won its event.

At the Yale Invitational, the men’s distance medley relay team of Serkes, Michael Kearney,Hilario, and Lowenthal, qualified for the IC4A Championships, with a time of 10:15.45, finishing eighth overall.

Remember to check out all the schedules, scores and highlights at www.fordhamsports.com.