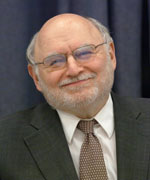 Legendary editor Victor Navasky won the Sperber Prize for a memoir that critics have called a “love letter” to journals of opinion..
Photo by Chris Taggart

When Victor Navasky wrote his farewell column to the readers ofThe Nation in November of 2005 after 27 years at the helm of the left-of-center magazine, he began with characteristic declarative insight. “In the magazine business,” he wrote, “survival is the ultimate test of success.”

As far as survivors go, Navasky said The Nation is at the top of the heap as the country’s oldest weekly and, therefore, “despite the fact that it has lost money for 138 years, it is America’s most successful magazine.”

Navasky was at Fordham University’s Lincoln Center campus on Nov. 27 to accept the 2006 Ann M. Sperber Biography Award for his memoir, A Matter of Opinion (Farrar, Straus and Giroux, 2005). In an often-humorous speech, Navasky skewered what he considers the pretensions of objectivity displayed by the “center” press and lauded the clarifying honesty of journals of opinion. Indeed, the notion of objectivity has long been Navasky’s bête noire, a journalistic practice that he views as at best flawed and at worst dishonest.

“This idea that people who write for a paper like [The New York Times] are not supposed to have ideas of their own, or if they do they are supposed to keep them to themselves and somehow that is a good thing, I don’t believe that,” Navasky said. “In fact, I believe, ironically, one of the arguments for journals like The Nation or National Review or The Weekly Standard is that the reader is put on notice about the values that inform the journal that they are reading. So [readers]have a better chance, if they don’t like those values, to look at them more closely. Whereas, if they are told . . . that ‘we’re not ideological; there are no values that inform what we do’ they are not put on notice, and to me that is not good for the democratic dialogue.” 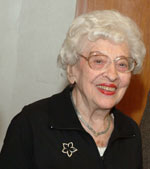 Ann Sperber’s mother, Liselotte Sperber, was on hand for the presentation of the award to Victor Navasky. Photo by Chris Taggart

Navasky was at the center of that dialogue for nearly three decades as the editor and publisher of The Nation. It is his long love affair with feisty, opinionated magazines (he started his own satirical magazine, Monocle, while still a law student at Yale University) and the role they play in civic discourse that animates much of his memoir.

“I hope I am not deluding myself when I believe that a magazine like The Nation makes its own contribution to democracy by helping to carry on and clarify the national conversation,” he said. “… Does that mean that I have any doubt that these magazines are important? No. I know they are important. They put new issues on the agenda. They advance the conversation. Even if they preach only to the choir, which is not true . . ., I would say they perform a service because they give people arguments and facts to defend what they intuitively understand to be true.”

The Sperber award, which was established in memory of Ann M. Sperber, author of a Pulitzer Prize-nominated biography of Edward R. Murrow, is presented annually to a writer who has demonstrated exceptional achievement in writing and research and has published a biography in the field of journalism or media studies. Ann Sperber’s mother, Liselotte Sperber, established the award with a gift to Fordham in honor of her daughter.