This Month in Fordham History 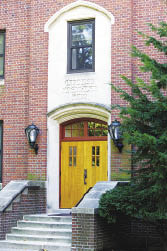 In July 1947, Fordham opened a new building next to Keating Hall that would provide a home and a sense of community to Jesuits-in-training who were dispersed around the Rose Hill campus.

Robert I. Gannon, S.J., then-president of Fordham, came up with the idea for the building and modeled it on the Jesuit residence at Cambridge University, where he had studied. The three-story brick building was named for Fordham alumnus Francis Cardinal Spellman, archbishop of New York at the time.

Spellman Hall housed about 50 Jesuit scholastics studying at Fordham or other area universities, as recounted by Robert J. Roth, S.J., in As I Remember Fordham (Fordham University Office of the Sesquicentennial, 1991). The scholastics came from all over the world, as far away as the Philippines and India, which “made for a good exchange of ideas, information, and viewpoints,” he wrote.

Today Spellman Hall is a residence for Jesuits who serve the University.