skip to main content
Return to Fordham University
You are at:Home»Inside Fordham»Softballer Selected as Finalist for Collegiate Player of the Year 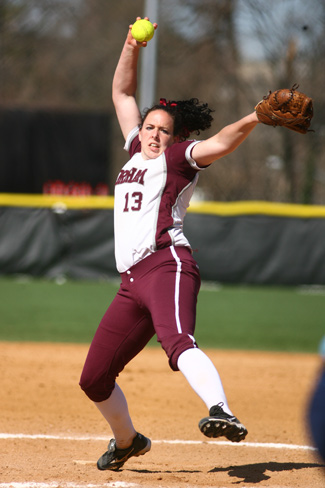 Fordham sophomore pitcher Jen Mineau has been named a finalist for the Collegiate Player of the Year award by the Amateur Softball Association of America.

Mineau, the No. 1 pitcher in the Rams’ starting rotation, is the only sophomore among the 25 finalists. She is the lone Atlantic 10 representative on a list that includes 20 schools spanning seven Division I conferences, and is the only player from the Northeast.

“I am so proud of Jen, and happy for our program to get the recognition,” said Fordham head softball coach Bridget Orchard. “She has worked really hard and deserves everything she gets. I am honored to coach her and see her improvement every day.”

The winner will be announced at the opening of the NCAA 2010 Women’s College World Series in Oklahoma City. This award, which is the most prestigious honor in Division I women’s collegiate softball, recognizes outstanding athletic achievement by female college softball players across the country.

Through 36 games this season, Mineau (18-5), has broken the records for strikeouts in a single game (19), the single-season strikeout count (288) and shutouts in a season (7). She was named Atlantic 10 Pitcher of the Week twice (Feb. 22 and March 1) and is on pace to set Fordham’s single-season ERA record with her current ERA of 0.72.

Mineau has struck out the side 27 times in 154.2 innings pitched. She has allowed 70 hits and 22 runs in 30 appearances. She has had the four best strikeout performances in Fordham history with 19 against Dayton in the first game on March 28. She set the record earlier in the season with 18 against Morehead State (Feb. 20) and Winthrop (March 20), 16 versus Memphis (March 6) and 15 versus Texas A&M (Feb. 25).

In the first weekend of play, Mineau set two Fordham records as she pitched a seven-inning perfect game in the season-opener against Morehead State (Feb. 20). The seven-inning perfect game was the first in Fordham’s 25-year softball history. She threw a school record 318 strikeouts en route to a 10-0 win. It was the second perfect game and third no-hitter of Mineau’s career, while her 18 strikeouts broke the school record of 14 set by Sara Kinney in 2007. Since then, Mineau broke her own record striking out 19 batters at Dayton on March 28 for the new record.