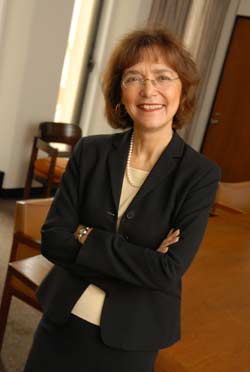 Clara E. Rodríguez, Ph.D., has been appointed to serve on the Citizens’ Stamp Advisory Committee, which recommends subjects to appear on U.S. postage stamps.
Photo by Chris Taggart

Clara E. Rodríguez, Ph.D., professor of sociology and former dean of Fordham’s College of Liberal Studies, has been appointed by Postmaster General John E. Potter to serve on the Citizens’ Stamp Advisory Committee, which recommends subjects to appear on U.S. postage stamps.

“I consider it a great honor to serve on the Citizens’ Stamp Advisory Committee,” Rodriguez said. “The USPS has such a long and storied history and plays such an important role in the lives of all Americans. To be a part of that history, and to help select the images that reflect the vitality and diversity of this amazing and constantly changing nation, is a major responsibility, and one I embrace with great enthusiasm.”

The postal service receives about 50,000 letters regarding the stamp program each year, but only 20 to 25 subjects are commemorated on postage annually. The 15-member committee is responsible for choosing new subjects for stamps, reviewing their designs and approving final products on behalf of the postmaster general.

Rodríguez, author of 10 books, most recently co-authoredThe Culture and Commerce of Publishing in the 21st Century(Stanford University Press, 2007), which won a National Jesuit Book Award last year. The October 2007 issue of Hispanic Business named her one of the “100 Most Influential Hispanics.”