skip to main content
Return to Fordham University
You are at:Home»Inside Fordham»Sociologist Warns of New Form of Segregation 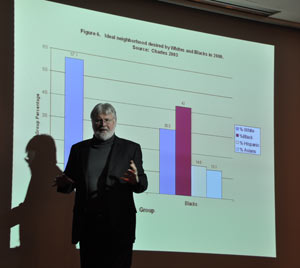 Douglas S. Massey, Ph.D., says that America is currently in the Era of Aversive Racism.
Photo by Patrick Verel

The United States is not as racially segregated as it once was, but according to Douglas S. Massey, Ph.D., a new division is occurring, with money taking the place of skin color.

Massey, the Henry G. Bryant Professor of Sociology and Public Affairs at Princeton University, presented “The Changing Bases of American Segregation” on Oct. 14 at Fordham’s Rose Hill campus. His presentation was the first urban studies lecture, and coincides with the launch of the University’s master’s degree program in urban studies.

In examining U.S. Census data from the 20th century, Massey said that the early 1970s saw the highest levels of segregation between blacks and whites. In some American cities, the division was as great as apartheid-era South Africa. He labeled the period from 1900 to 1970 as the “Era of Pervasive Racism,” and the four decades from 1970 to the present as the “Era of Aversive Racism.”

Attitudes toward African Americans have improved markedly; for example, 33 percent of whites disapprove of interracial marriage now, compared to 90 percent in 1964, Massey said. Still, he added that American society is not out of the woods just yet.

“The feelings have not disappeared, even though the principles have pretty much gone away,” he said. “We are not a post-racial society. Race is transmuting. The meaning is changing, and it’s becoming a more complex construct.

“Principled racism is more or less dying out, and you can really see this if you look at cohort replacement, or older people versus younger people. The strongest single predictor for voting for Barack Obama was age,” he said.

To find the places where desegregation has occurred the quickest, Massey, a past president of the Population Association of America, the American Sociological Association and the American Academy of Political and Social Science, suggested looking to towns with colleges, military bases or housing built before the 1970s. Many of these places are experiencing surges in Asian and Latino immigration, further complicating the picture.

But while American society is slowly integrating on the basis of race and ethnicity, it is going the other direction on class and education.

“The period from 1970 to the present was one of tremendous socioeconomic change. The United States became a vastly more unequal society over this period,” he said. “We are now more unequal in terms of income and wealth than at any time since 1929. It’s as if all the equalizing policies of the New Deal have been wiped out. In fact, many of those policies have been wiped out.”

In addition, according to data collected from census tracts and counties, the level of ideological segregation spiked in 2000.

The rising income inequality is not solely responsible for segregation, though. Massey explained in the study “The Effect of Density Zoning on Racial Segregation in U.S. Urban Areas,” he found a direct relation between zoning restrictions that limit the density of suburbs, for example, to one-family houses, and the perpetuation of segregation patterns.

“What we need to look at more and more is not necessarily race and class separately, but race and class together,” he said. “American society is increasingly beginning to segment on the basis of more complicated race/class interactions.”