skip to main content
Return to Fordham University
You are at:Home»Colleges and Schools»Graduate School of Social Service»Social Work Group Strives to ‘Be the Evidence’ in the World 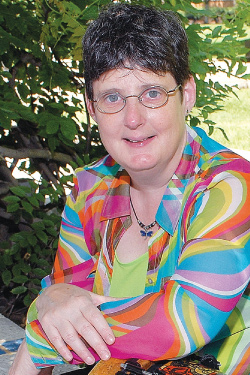 Tina Maschi began the Be The Evidence Project to spread awareness of critical social issues of the day.
Photo by Ken Levinson

For 10 years, Tina Maschi, Ph.D., documented the ways in which trauma led to delinquency among the youths and adults she worked with in the juvenile and criminal justice systems.

“From the time I walked into the correctional settings, I said there’s something wrong with this picture,” said Maschi, an associate professor in the Graduate School of Social Service (GSS).

She could help the incarcerated men, women, and youngsters she met by offering them therapy during their prison stays and preparing them when it came to time to reenter society. But she was only one person with limited resources. It would require more extensive, communal efforts to halt the cycle of traumatized youth moving in and out the prison system.

Maschi’s frustration became the seeds for the Be The Evidence Project (BTEP), a wide-ranging effort to spread awareness of critical social issues of the day. Run under the GSS, the project functions as a channel to provide information on issues of human rights and social justice with the aim of enlisting help from the community at large.

“It dawned on me that large-scale societal change is a long haul, and it takes a lot of organization and collective grassroots activism,” said Maschi, who is the executive director of BTEP. “But one thing that we have control over is how we think. Each one of us can change our outlook on current social issues.”

An allusion to Gandhi’s call to be the change you wish to see in the world, BTEP began in 2010 with awareness-raising events on topics such as trauma among incarcerated individuals. In October of 2011, the project launched its first major event with the Aging Prisoner Forum. The event drew more than 150 attendees, and resulted in a white paper penned by national experts who provided the latest research on prisoners growing old and dying in prison.

Since then, BTEP has hosted an array of projects, from the rights of the lesbian, gay, bisexual, and transgender (LGBT) community to the use of the arts to promote well-being and to fuel social change. The group hosts town hall meetings, public forums and conferences—all of which are free and open to the public—and sponsors research on the issues raised. The events are collaborative, involving affected populations, clinicians, researchers, policymakers, and more.

“Some institutes are founded on one particular issue, but we try to be flexible with the projects,” Maschi said. “A broader umbrella allows us to adopt current human rights and social justice issues as they arise.”

Raising public awareness is at the heart of BTEP’s mission. According to Maschi, the idea is to shed light on social issues in order to help individuals and communities develop a critical consciousness about the issues and respond to them knowledgably.

To accomplish this goal, BTEP affiliates—Maschi and a rotating group of graduate and undergraduate students, interns, and community partners—also use the project to disseminate the latest in scholarly research.

“Academic articles can take two years to be published,” she said. “A system of rapid dissemination to the public is important because if research is only in academic journals, only certain people have access to it.

Information sharing is also critical for those working in the field, said Linda Hood, GRE ’07, a doctoral student at GSS who works with BTEP, because 21st-century social work is facing a number of new challenges. Dwindling funds have forced many cash-strapped agencies to rethink the way they run their organizations.

“Agencies have had to take on the business model to survive,” Hood said. “It’s now about efficiency—doing the job for the least amount possible, just like a business. In many ways, that hurts access to and quality of services.”

Advocacy has suffered as a result, Hood said. In some cases, organizations’ public awareness campaigns have been used to fundraise, rather than as a tool to educate persons about the needs of a population. Such campaigns sometimes breed misinformation that ultimately confuses and even harms clients.

That is why, Hood said, BTEP is critically important for the social work field and its beneficiaries, as well as for the community at large.

“It’s about coming up with creative solutions, new ways to solve old problems,” she said. “And Tina is a creative risk-taker.”

In just three years, BTEP has garnered national attention from agencies, universities, and other organizations seeking to employ BTEP’s method of advocacy, research, and education, Maschi said. And since the project is not tied to a particular grant (it is funded through a number of channels, including the John A. Hartford Foundation, the Gerontological Society of America, the National Endowment for the Arts, the Community Trust Fund, and Fordham’s Office of Research), there is no end in sight.

Maschi said that in the future, BTEP will continue to sponsor events and research on a variety of issues in order to increase public awareness about social justice, as well as to “be the evidence” for the next generation of social workers.

“We’re making a unique contribution toward an understanding of societal issues, and we’re advancing our set of practices,” she said.

“Because if we don’t change the collective thinking about issues, if we don’t have a spirit of tolerance in society, then we can have all the laws on the books you want but nothing will change.”

In addition to the campus events slated for this academic year, BTEP will host the National Organization of Forensic Social Work at Fordham in July 2014.

“We’ll be advocating for a new era of forensic practice that calls for cultural justice and ends disparities,” she said.