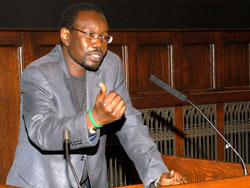 None can tell the story of a war better than a survivor. Amir Idris, Ph.D., professor of African and African American studies department at Fordham, is one such person; he moved to the United States from the Sudan 17 years ago because “the conflict threatened my own existence.”

Although the atrocities committed by government-sponsored Arab janjaweed mercenaries on black African Sudanese are new to the Western consciousness, to Idris, the pattern of violence has its roots in the 1956 birth of the Sudanese nation, the subsequent military coup d’etat of 1958, and outright civil war beginning in 1962.

Fordham students and faculty learned about the historical complexities and day-to-day horrors of Sudan that have resulted in an estimated 200,000 to 400,000 deaths, and more than 2 million displaced persons, since 2003 at Idris’ lecture on Nov. 30, sponsored by the Social Justice Forum and an array of Fordham organizations.

Discovery of oil has since brought Africa’s largest nation wealth and power. China is a large consumer and developing partner. The United States has a complex relationship with the Sudanese, as it tries to pry information about Al Qaeda from Sudanese officials (Osama bin Laden was expelled from the country before moving to Afghanistan). Two of the world’s biggest economic and political powers are thus cautious to take direct action against the Islamist government that persecutes the country’s black population—many of whom are also Muslims.

“People are dying because they are non-Arabs,” said Idris. “The government does not consider them to be citizens, but subjects.”

Idris also said that the efforts of the African Union, which has already committed 7,000 troops to the western region of Sudan, are not enough. The AU declared the situation “an African problem to be solved by Africans,” but Idris does not agree. United Nations resolution 1706, calling for ground troops to be deployed, must be enforced with or without Khartoum’s consent, he said. “[Resolutions] are just words on paper until troops are on the ground,” he said. “We have to start looking at the Sudanese government as part of the problem, not part of the solution.”

Idris said that the long-running conflicts in Sudan between North and South, farmer and herder, Muslim and Christian, Arab and black, must have an eventual political solution. But with thousands in refugee camps, and the conflict spreading to neighboring Chad, the time for direct action is now, he said.

Idris commended the students for showing up as final exams approached, and encouraged them to continue organizing and bringing Darfur to public attention. Such situations can only happen, he said, “when we do not extend our humanity to those who are not like us.”