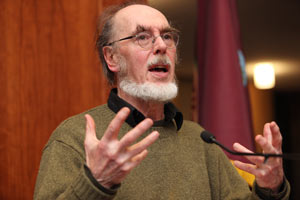 Eamon Grennan treats the Poets Out Loud audience to a selection of his work.
Photo by Michael Dames

The question of what makes Irish poetry such a revered art form is one that Eamon Grennan answered with the following construct: the Irish people, said the poet, have an “innate appetite for language and appreciate the good use of it.”

It must have pleased Grennan when the Fordham community revealed its own appetite for his poetry by coming out during the season’s worst storm for his Feb. 25 reading at the Lincoln Center campus.

The Dublin-born poet read his work at “Spotlight on Irish Poetry,” sponsored by Fordham’s Poets Out Loud (POL), along with poet/critic Stephen Burt and Fordham graduate student Katy Kahn. Outside, large snowflakes pelted the windows of the 12th-Floor Lounge in the Lowenstein Center.

“I love the fact that people come out for poetry under all conditions,” Grennan said, thanking the sizable audience for “slushing through it” to attend. For their efforts, the audience was treated to a sampling of the prize-winning poet’s early and most recent works, which explore the beauty of the natural world and the shadows of meaning found in material things.

“There is something a little mystical and yet, not only luminous, but also just on the edge of the spiritual,” said Heather Dubrow, Ph.D., John Boyd, S.J., Chair in Poetic Imagination and POL director, of Grennan’s work. “In this and many other ways, his lyrics are about—are located on—edges.”

Reading an early poem, “Swifts over Dublin,” Grennan reflected on how the migrating birds signify his own ritual of returning home every summer to a cottage near Connemara, Ireland.

The author also recited a string of untitled 10-line poems from The Quick of It (Gallery Press, 2004), a volume that he likened to “a little sketchbook, a thickened landscape, moments of excavation, like an egg—you break it and stuff comes out.”

“One of poetry’s tasks,” he said, “is to bring the large and the small into alignment.”

From Matter of Fact (Graywolf Press, 2008), Grennan read a “kind of” elegy for his late father, “In Venice on My Father’s Anniversary.” The poem described a strange sadness and prescience of mortality, experienced as Grennan was ferried across a canal on a dark winter’s night, “the water shaking under us where we stood in the bodies we had.” Yet once he stepped on the bank he found the feeling gone, himself on the “known track once more.”

A professor emeritus of English at Vassar College, Grennan is the author of nine books and recipient of numerous awards, including the Lenore Marshall Poetry Prize and the 1997 PEN Award for Poetry in Translation.

Poet and critic Stephen Burt read from his own book of poetry, Parallel Play (Graywolf Press, 2006), and from the new works of the 2003 Pulitzer Prize-winning poet Paul Muldoon, who happened to be among the audience.

Burt described Muldoon’s new works as “moving back and forth between the kind of playfulness many of us associate with him, and bleakness.”

Dubrow told the audience that the evening’s spotlight on Irish poetry was “impelled both by the exciting developments in Irish poetry in Ireland and in the United States, and by Fordham’s many historic connections to Irish culture and studies.” One of those connections, she said, was Fordham’s granting of an honorary degree to Nobel Prize-winning Irish poet Seamus Heaney.

Dubrow, who only recently took over as POL director, thanked her predecessors Frank Boyle, Ph.D., and Elizabeth Frost, Ph.D., both associate professors of English, and recognized Fordham’s financial support for POL in difficult financial times.

Following the readings, a drawing was administered for all attending students; winners received signed copies of books by the evening’s poets.