skip to main content
Return to Fordham University
You are at:Home»Inside Fordham»Skelton Selected to Play in East-West Shrine Game 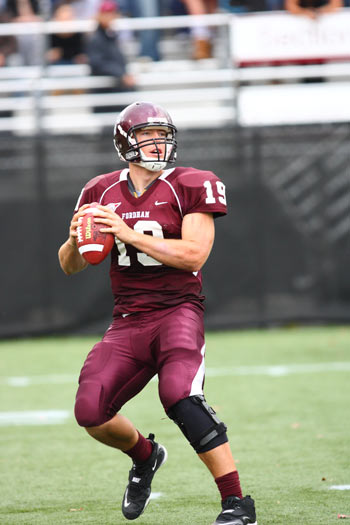 John Skelton finished his Fordham career as the University’s all time leader in completions, yards and touchdowns.
Photo courtesy of Fordham Athletics

Fordham University senior quarterback John Skelton has been selected to appear in the 2010 East-West Shrine Game.

Rated one of the top senior quarterback prospects in the nation, he will appear in the 85th edition of “America’s Premier College All-Star Football Game” on Jan. 23 at the Florida Citrus Bowl in Orlando. He will be just the third player from the Patriot League to appear in the game, joining Gordie Lockbaum (Holy Cross, 1987) and Adam Bergen (Lehigh, 2004).

Skelton was one of 37 players to accept an invitation to the game, the organization announced. He was selected to the East roster, where Central Michigan’s Dan Lefevour will join Skelton at the quarterback position. Skelton and wide receiver Andre Roberts of The Citadel were the only players from the Football Championship Subdivision (FCS) to be placed on the game’s initial rosters.

Skelton wrapped up a record-setting career at Fordham with an outstanding senior season. He led the FCS in passing yards per game and total passing yards, while ranking second in total offense. Earlier this year, Skelton completed 43 of 67 passes for 427 yards against Holy Cross on Oct. 31, all school records.

“I was at Louisiana Tech with Tim Rattay and Luke McCown, who both went on to play in the NFL, and I think John is right up there with them,” said Tom Masella, head football coach at Fordham. “It’s a much deserved honor for John, who is a fantastic quarterback. I’m sure he’ll do well.”