skip to main content
Return to Fordham University
You are at:Home»Inside Fordham»Skelton Drafted by Arizona Cardinals 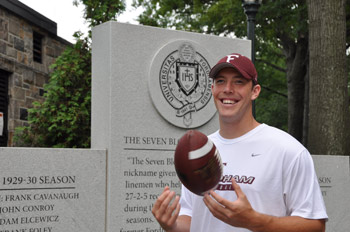 Quarterback John Skelton will be following in the footsteps of former Fordham greats when he suits up for the Arizona Cardinals next season.
Photo by Joseph McLaughlin

The last time a Fordham football player was drafted by an NFL team, Lyndon Johnson was president, gas was 34 cents a gallon and the NFL held their second-ever championship game, something called the Super Bowl.

That all changed on April 24 when quarterback John Skelton was drafted in the fifth round by the Arizona Cardinals. He was the 155th player chosen and sixth quarterback selected at the 75th annual NFL draft.

Fordham has had two players selected in the first round of the draft: college football and NFL hall of famer Alex Wojciechowicz by the New York Giants in 1938 and Steve Filipowicz by the Detroit Lions in 1943. The Rams have had three players chosen in the third round, one in the fourth and one in the fifth, not including Skelton.

The quarterback, a 2009 Second Team All-Patriot League selection, wrapped up a record-shattering career for the Rams last fall, completing 284 of 441 passes (64.4 percent) for 3,708 yards and 26 touchdowns.

Skelton was selected to play in the prestigious East-West Shrine game in January and received an invitation to the NFL Combine.