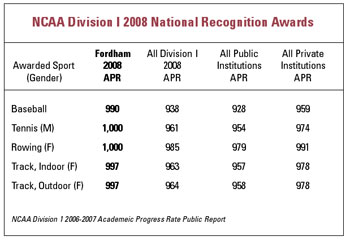 The NCAA’s academic progress rate (APR) indicator gauges how well each team is performing academically based on the eligibility, retention and graduation of each student-athlete. This year, citations were given to Fordham baseball, men’s tennis, women’s tennis, women’s rowing, women’s indoor track and women’s outdoor track.

This marks the second consecutive year that those teams were honored for their high APR scores, which fell in the top 10 percent of their respective sports.

Under the guidelines, a student athlete on scholarship will receive a score of four points if he or she is eligible and returning for both academic semesters. Team scores of 975 and higher are honored for their excellence.

It is Fordham’s institutional responsibility to perform well on the APR indicator, according to Marianne Riley, senior associate director of athletics. “The scores speak to our standards and expectations, and our terrific staff,” she said.

It is not uncommon for teams—especially football, baseball and men’s basketball—to fall below the penalty threshold of 925, but none of Fordham’s teams have ever scored below cutoff, said Frank Taylor, academic advisor to student athletes.

Acceptable academic standing, according to the NCAA, is a 1.8 grade point average (GPA) for freshmen, 1.9 for sophomores and a 2.0 for juniors and seniors. Fordham’s student athlete GPA hovers around a 3.0, Taylor said.

“Our APR scores are usually very high,” said Ted Bonanno, coach of the women’s crew team. Likewise, track and field coach Tom Dewey said he was proud of the men’s and women’s teams.

“They are student athletes in the true sense of the word,” he said.

For the second consecutive year, Fordham is tops in the Atlantic 10, with six teams recognized, tied with Xavier and Dayton. Overall, the Rams rank 28th in the nation in the APR indicator among Division 1 programs.

“It’s easy to see how academics and athletics thrive together at Fordham,” said Jackie Prevete, a senior biology major at Fordham College at Rose Hill and captain of the women’s track team.