skip to main content
Return to Fordham University
You are at:Home»Inside Fordham»Six Alumni Inducted in Fordham Athletics Hall of Fame 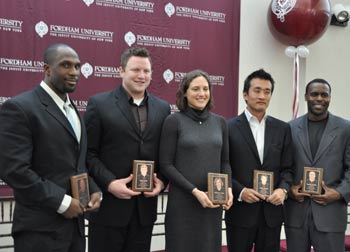 Hall of fame inductions are usually based on impressive statistics, such as touchdowns caught or home runs hit.

The six newest members of Fordham’s Athletic Hall of Fame have stats aplenty. But they also possess attributes that cannot be quantified, said Joseph M. McShane, S.J., president of Fordham, at the annual induction ceremony on Jan. 23.

“They are not inducted solely for what they did on the field, on the court or in the pool, but for how they live their lives,” Father McShane said. “We honor you and thank you for the example you set. You are now counted among the Fordham saints, and what we refer to when we tell our students what it means to be men and women for others.”

“She was the whole package,” Vasey said. “She was a great leader, but also a sweetheart, an intelligent person and a caring individual. She encouraged everyone around her to do her best. Tennis recruits wanted to play at Fordham because they wanted to play with her. She is so deserving of this honor.”

Dragan could not attend the event because she was in Romania. In an e-mail interview, she said participating in Fordham athletics shaped her life in a unique way.

“It taught me discipline, hard work, fair play, team spirit, respect, confidence and more,” Dragan said. “I feel lucky to have been a student athlete at Fordham, where I could pursue a tennis career, receive a solid education for my resume and a get life education that I treasure every day.”

Other new honorees included Sophie Namy (FCRH ’00), who became one of Fordham’s top rowers after an injury curtailed her soccer career; and Akira Kosugi (CBA ’96), who set several records in his only season with the men’s swimming team.

“To be inducted into the same hall as Vince Lombardi is something I never would have imagined,” said Kosugi, who competed at the Japanese Olympic Trials in 1996.

“Even though as individuals we excelled in our particular sports, we all shared the common blessing of being educated at this University,” said Kirwin Watson, who served as a regional scout for the New York Jets from 2004 to 2009.

“There are people at Fordham who have done things for us that we can’t really put a price on,” he said. “They taught us how to be leaders.”

Watson said the inductees continue to grow and learn.

“A Fordham education—Fordham’s tradition and what it stands for—seeks to build well-rounded individuals. Being a leader means giving back, and I think we do that,” he said.