skip to main content
Return to Fordham University
You are at:Home»Inside Fordham»Sister Advocates Greater Role for Laywomen in American Catholicism 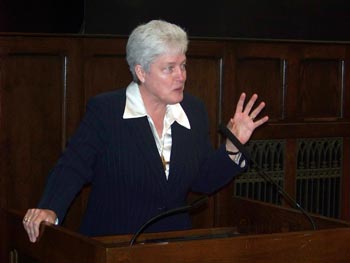 The expansion of the role of the laity, particularly women, in the Catholic Church was the focus of the third-annual Rita Cassella Jones Lecture, given by Mary Johnson, S.N.D., Ph.D., on April 21.

Sister Johnson, a professor of sociology and religious studies at Emmanuel College in Boston, outlined the church’s changing demographics in terms of age and race, as well as the shortage of priests in the United States.

In her lecture, titled “American Catholic Women Within and Without Parishes: A Sociological View,” she argued that those trends and Catholic law have opened the door for the increased role of women in the church, if only the hierarchy would embrace that potential.

“We know that the bulk of parish life is held up by females,” said Sister Johnson, who pointed out that the vast majority of religious teaching and training within American parishes is handled by women, in areas such as youth ministry and in preparation for the sacraments.

“There has been an explosion of ministers on the parish level, when we look at it along gender lines the majority of them are female,” she said from the podium in Duane Library’s Tognino Hall.

But that explosion has not translated into new priests, said Sister Johnson, who noted that while America’s Catholic population has grown steadily since the 1960s, the number of priests in this country has not kept up.

“We are very close to parity,” she explained while noting that there is roughly one priest for every American parish. But some of those priests are sick or retiring, which means there are far fewer priests available than the numbers show.

The opportunity to get more women involved in the American church lies in Canon Law, Code 517.2, which provides for the pastoral and administrative care of a parish to be placed in the hands of a deacon, religious or layperson. Many parishes in the United States, particularly in the Midwest, currently operate under this rule, which Sister Johnson praised as a way to free priests to do sacramental work without focusing on administrative tasks.

But in recent years an increasing number of these “parish life coordinators” have been deacons, rather than laypeople, something Sister Johnson attributes to convenience. Since deacons can perform some sacramental duties, bishops have taken to using them as “mini-priests” and are putting as many as possible into the role of parish life coordinator, and therefore shutting out laywomen.

With statistics to back her up, she noted that most Catholics are ready to embrace such an expanded role for women, and she hoped church leaders would accept that and act on it.

In a question-and-answer period, Sister Johnson noted that without a greater embrace of laywomen, the tide of parish and Catholic school mergers and closings cannot be stemmed, and American Catholics will have to look forward to overworked priests and combined sacrament services.

“This is another train wreck waiting to happen,” Sister Johnson said, “and we’re not talking about it in the way we should.”