skip to main content
Return to Fordham University
You are at:Home»Inside Fordham»Shedding Light on the Lives of Black Women Migrants to New York 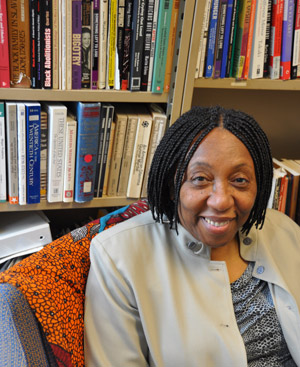 Irma Watkins-Owens, Ph.D., is reconstructing the histories of African American and Caribbean women who migrated to New York City in the late 19th and early 20th centuries.
Photo by Gina Vergel

Irma Watkins-Owens, Ph.D., an associate professor in the Department of African and African-American Studies, is adding much-needed detail to the annals of New York City history.

The recipient of a Fordham faculty fellowship in 2008, Watkins-Owens is reconstructing and comparing the histories of African-American and English-speaking African-Caribbean women who migrated to New York City from 1898 to 1945.

“Black women migrants—southern, working class and foreign born—were a significant social presence in New York City, yet they are barely visible in scholarly literature,” she said. “The experiences of these women are critical to understanding the larger story of black migration and the African diaspora of the 20th century.”

Nearly two decades before the Great Migration of 1916, thousands of black women began streaming into New York City mostly by boats, which sailed regularly between ports along the Atlantic seaboard, or by ships from the Caribbean.

Throughout World War II, women continued to arrive in greater numbers than men, with and without their families, by passenger trains, automobiles, buses and even on foot.

Watkins-Owens said they were attracted to New York City because it offered a service economy where jobs could be found. In fact, many of those women settled on the very land where Watkins-Owens teaches.

“The block where Fordham’s Lincoln Center campus is today was part of an African-American and Irish community called San Juan Hill,” she said. “They settled in this area because there were African-American institutions, such as churches and small businesses.”

Also, before housing opened in Harlem around 1905, there were only a few neighborhoods in Manhattan where black people were permitted to rent apartments.

Watkins-Owens pored over state and federal census records and those of women’s organizations to reconstruct the histories of these women and find out about the organizations they joined, the work they did and the leisure activities they enjoyed.

“Many of them worked as domestics, so on that one day off they usually had, sometimes they went to church, but they also had lots of leisure activities,” she said.

“They went on train and bus trips. They belonged to mutual aid societies and social clubs. They also went to nightclubs and had fun. Most of these women were in their late teens or 20s, so they loved New York, where there was a vibrant ragtime and emerging jazz scene.”

Until recently, migration studies have not examined this aspect of women’s lives. Watkins-Owens found that, for southern women in particular, church was less an institution for social control in New York than it was in the South.

“Not that the church didn’t remain a significant institution, because any respectable woman had to go to church, but it didn’t have as much control over their personal lives,” she said. “They had more opportunities for a social life outside of the church.”

By 1930, one quarter of New York’s black population was Caribbean-born. The presence of Caribbean women who established networks that incorporated both males and females proved crucial in sustaining a community of migrants, Watkins-Owens said. Like southern women, they helped shift the pattern of household service from “live-in” to “day work,” a move that was critical to the formation of permanent Caribbean communities to which women returned at night.

The experiences and problems of these women reveal a more complete narrative of migration and immigrant community, she said.

Although Caribbean women, like Caribbean men, were a highly select population in terms of literacy levels and other class advantages, patterns of mobility in New York were influenced by gender. First-generation men with educational and other advantages were more likely than first-generation women to become involved in professional careers, business and electoral politics in the African-American community.

“It would be Caribbean daughters—not mothers—who would emerge in public life. First-generation women relied on transnational social networks in their public as well as private lives, while investing in their children’s education,” Watkins-Owens said.

All black women experienced severe discrimination in the job-opportunity structure before 1945 and, despite exceptions, most were restricted to service work. Still, observable differences between southern and Caribbean migrants were related mainly to access to social class advantages before they arrived.

The smaller number (about 20,000 in 1930) of Caribbean women had relatively homogeneous class backgrounds. Most had completed elementary education in the British system and many had training in a trade such as needlework.

“Those who emigrated from the Caribbean had to have some resources to pay up to $65 to come here,” Watkins-Owens said. “It was a very selected migration.

“The much larger southern female migration (more than three times those from the Caribbean by 1930), on the other hand, was highly diverse economically and socially. Many southern women had no money for boat or train fare and were brought to New York on so-called ‘justice tickets’ by agents who demanded a woman’s first month’s wages in exchange for transportation.”

Watkins-Owens plans to continue finding details to add to this history of migrant women in New York City.

“Together with my previous book, Blood Relations: Caribbean Immigrants and the Harlem Community(Indiana, 1996), about intra-racial ethnicity and community formation, my research goal is to address larger issues of New World racial formation by considering black perspectives formed inside and outside U.S. borders,” she said.

Watkins-Owens is also researching “Caribbean Immigrants in Port Cities of the United States from 1790-1880.” Her objective is to document the presence, status and activities of forced and voluntary immigrants in cities such as Philadelphia, New York and New Orleans during the century after the Haitian revolutionary period.