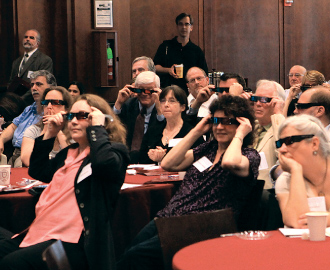 Vershbow delivered a mile-high perspective of digital possibilities for an august institution like the NYPL, a message that resonated with Fordham faculty wrestling with similar issues of how to engage a digital audience.

He described the NYPL as a 19th-century institution striving to remain relevant in the 21st century. With a world-class archival map collection that began being digitized in the last decade, the library is seeking to make the digital maps more dynamic and interactive.

Vershbow showed a digital image of a 19th-century map of Lower Manhattan that lives online. He then explained how that map can be rectified with contemporary maps using Google Earth through a NYPL-designed website, Map Warper. The 19th-century map sits on top of the contemporary map, and a transparency dial can fade the older map atop the new map.

The result shows how extraordinarily accurate the 19th-century maps were, as the streets resolve almost perfectly with their contemporary cousins.

Such newly combined maps have the potential to be used with other data, for example, the recently released 1940 Census. Maps can then yield much richer information, such as who lived where and what they did for a living.

“We’re trying to drop pins in time,” said Vershbow. “If we open up the data, we can get the community involved.”

Vershbow said that Map Warper is “a call to action,” to engage the public on the site to rectify maps for themselves. Once completed, the newly rectified maps are available for all to see, or to correct if there’s a mistake.

The NYPL has gone even further with crowd sourcing in other areas. Vershbow said the library has a collection of approximately 45,000 menus dating back to 1848.  However, as the fonts on the menus vary greatly, optical character recognition software is not able to recognize all the “funky fonts.”

In response, the NYPL has set up a “What’s on the Menu” site and has invited the public to transcribe the menus.

In much the same way that Wikipedia asks its community to help with quality control, the NYPL calls on the public to check the veracity of its data, he said. This “artisanal data harvesting” can only be accomplished through human and computer cooperation. The quality control may not be perfect, but the people who delve into the site are a conscientious group.

While the letters of Percy Bysshe Shelley have their own hallowed room within the library, what’s one to do with Timothy Leary’s floppy discs if the information can’t be accessed?

Verhshbow expressed a concern for preserving “tomorrow’s past” which will include newer writings that will exist on the digital cloud. Media archeology labs are being developed at some universities, but New York City still lacks a preservation lab, he said.

He warned of an “information hole” that could develop should the academic communities rely on technology companies to preserve important information.